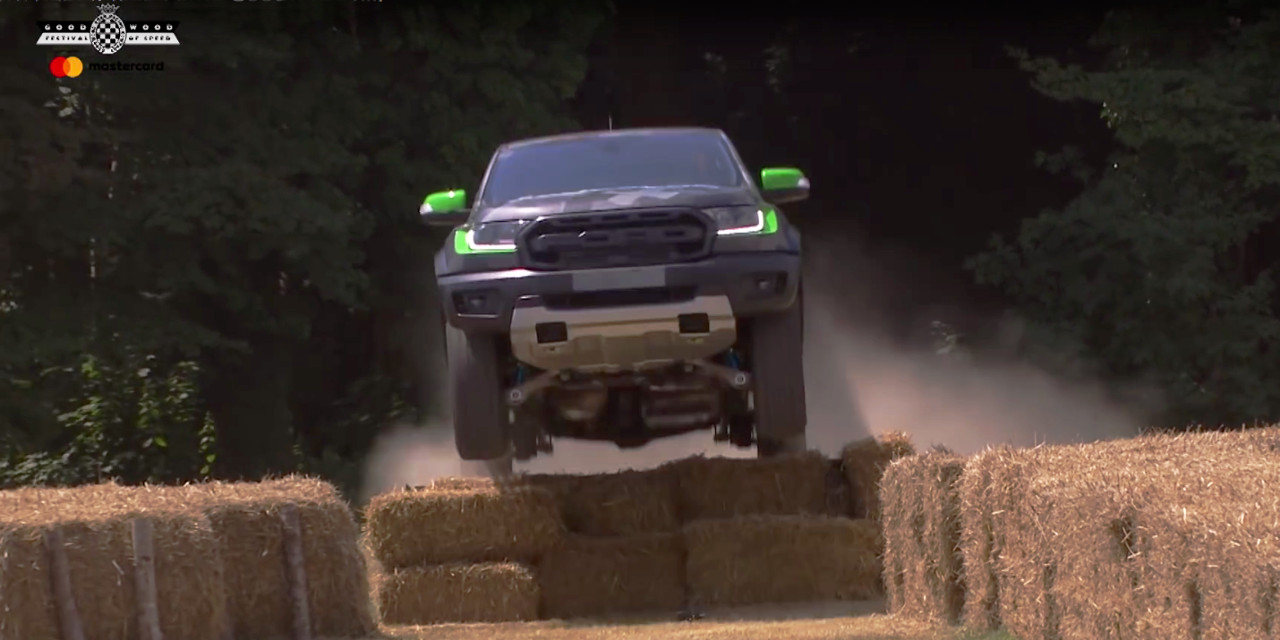 While we here in the United States wait patiently for Ford to unveil a North American version of the midsize Ford Ranger Raptor off-road-worthy pickup truck, the one developed for Australia and other key global markets made a big impression at this year’s Goodwood Festival of Speed – the 25th annual installment of the world-famous motoring event. One can’t help but wonder how England’s Lord March feels about such rowdy, in-your-face performance vehicles destroying so much of the grass on either side of his long, winding driveway each year, but as he keeps allowing Ford back to the event, we’d say he’s probably pretty okay with it.

The all-new Ford Ranger Raptor ran the 1.16-mile Goodwood Hillclimb in reverse, starting the descent in grand style by jumping over multiple hay bales to reach its starting mark. Why? Because Raptor, that’s why. From there, it proceeded down the hill at a decent clip before pausing on the main straight to show off with a quick powerslide on the grass.

It was all perhaps a bit showy, but how else is a rugged performance pickup bred for grueling off-road racing supposed to connect with the audience at an event dominated by high-speed road cars?

The first-ever Ford Ranger Raptor is a diesel-powered brute with approximately 210 horsepower and 370 lb-ft of torque onboard, supplied by a turbocharged, 2.0L EcoBlue I4. The engine is backed by Ford’s familiar ten-speed automatic transmission, and the truck is loaded with the sort of durable, purpose-built equipment demanded of a true, bona fide desert racer. This includes internal-bypass Fox Racing Shox with extra travel, BFGoodrich all-terrain tires, upgraded disc brakes all around, and plenty of underbody protection.

Be sure to check out the video above to see the all-new Ranger Raptor’s awesome Goodwood Hillclimb debut, and if you’re dying for more on the forthcoming North American version of the hardcore pickup, you can check out the latest spy shots right here.