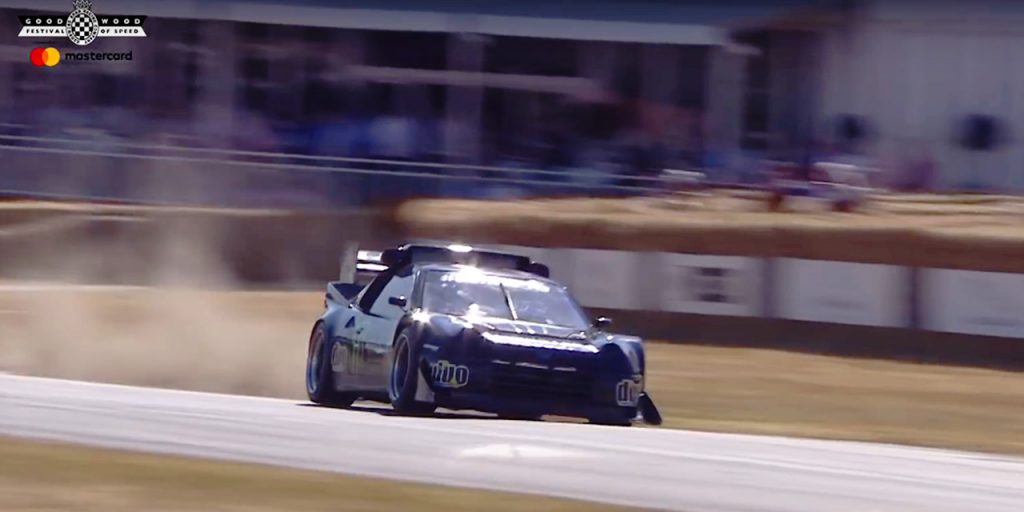 If you know of the Ford RS200 already, that’s only because it’s one of the most wonderfully bonkers, high-performance automobiles ever to come out of the Blue Oval. A true homologation special, the mid-engine, all-wheel-drive Ford RS200 was built in limited numbers of about 200 units in order to meet FIA production requirements for the World Rally Championship’s Group B class. Power in the road-going version of the car ranged from 250 horsepower in the original, “standard” car to around 600 horsepower in the super-limited “Evolution” model.

Given its rarity, sporting heritage, and superb performance, it’s always a treat to catch a Ford RS200 in the act of driving – unless, of course, some harm befalls it. Such was the case at last week’s Goodwood Festival of Speed, when pro rallycross driver Liam Doran took his Ford RS200 on the famous Goodwood Hillclimb, only to lose the rear bodywork as he blasted up the driveway at the Goodwood Estate in the UK. The sudden loss of downforce upset the car dramatically, sending the car promptly off course and into the hay bales.

Doran was, thankfully, uninjured by the crash, but the same couldn’t be said for his Ford RS200. The rear suspension was broken by the incident, and a small fire broke out at the rear of the car. Thankfully, Liam Doran and his crew got the Ford RS200 reasonably well-mended straight away, allowing the rally-bred supercar to run the hillclimb again before the 2018 Goodwood Festival drew to a close.

You can check out Liam Doran’s spectacular crash in his Ford RS200 in the video clip above.