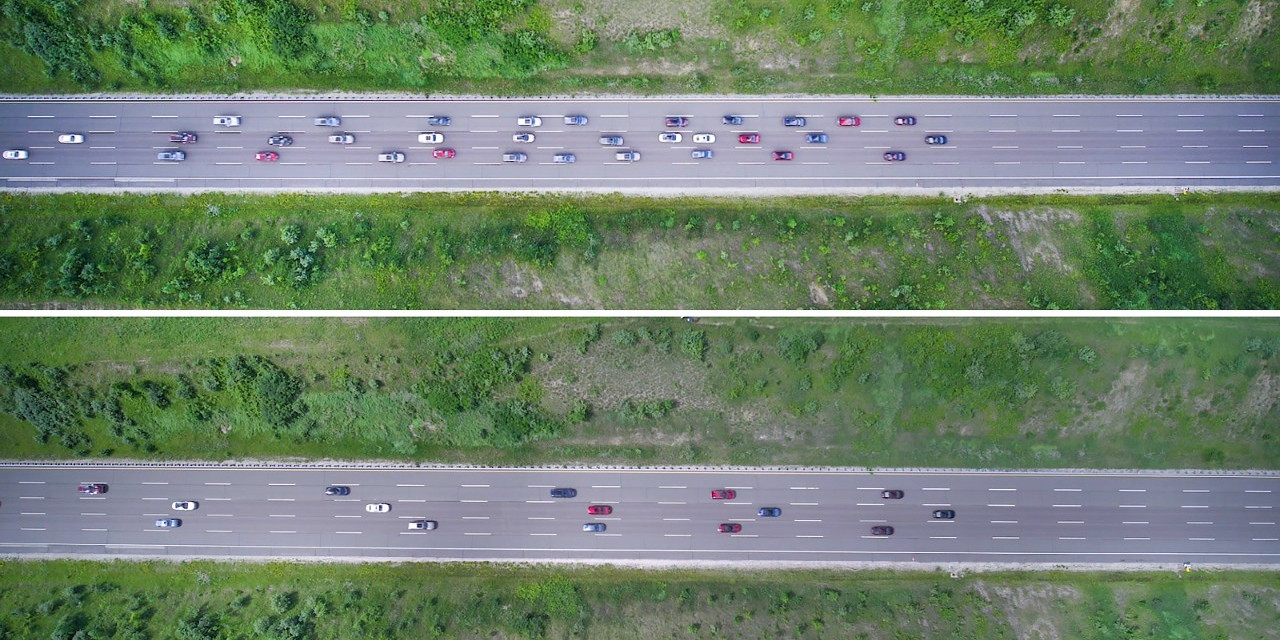 You’re familiar with so-called “phantom” traffic jams; they’re the ones that pop up seemingly out of nowhere, with no accident, construction, or road hazard to blame for the slowdown. They’ve been studied extensively, and have several primary causes, including distracted driving, poor reaction times, unnecessary braking, merging into traffic without signaling, and the like.

Now, a new study conducted by Ford Motor Company and researchers from Vanderbilt University has shown that phantom traffic jams, which cost the average US driver dozens of hours and hundreds of dollars every year, could be helped dramatically by adaptive cruise control systems.

Adaptive cruise works by automatically decelerating a car below its set cruising speed when necessary in order to keep a set following distance with the car in front of it. The system can outperform most human drivers with respect to reacting promptly and – more importantly – decelerating smoothly, which gives the other cars behind it more time to react, so that they, too, can decelerate more smoothly.

It’s helpful to think of a phantom traffic jam as a sort of “wave”: one sudden braking event effects the vehicles behind, creating a ripple effect where vehicles further down the line react with a similar, sudden braking response. Smoothing out one’s deceleration – braking over as long a distance as practical rather than slamming hard on the brakes – is the antidote, and should multiple drivers in a chain all manage to do it, the “wave” is effectively damped over time.

But here’s the thing: according to Ford’s research with Vanderbilt, a good, automated adaptive cruise control system can perform the task more optimally than a group of human drivers.

Testing was conducted on a closed course, using 36 vehicles split into three lanes of 12, in a simulation of typical highway traffic. The three lead vehicles mimicked a traffic disturbance, slowing from 60 to 40 mph, leaving the following vehicles to decelerate as needed to avoid a collision. Without adaptive cruise enabled, drivers ended up braking harder than the vehicle ahead, creating a ripple effect that actually grew more pronounced as it moved rearward through traffic.

On subsequent runs, with Ford’s adaptive cruise system enabled, cars decelerated more gently, minimizing the impact of the disturbance to traffic flow as the wave moved back. In one of the runs, active cruise actually damped the braking wave so effectively that the rearmost cars in the test only had to slow by 5 mph.

“The fact that we saw a commercially-viable ACC system fully suppress the traffic backup is quite impressive,” says Vanderbilt Professor of Civil Engineering Daniel Work. “And while we know this won’t happen in every situation or in every circumstance, it’s very promising to see that commercially available ACC systems can already have a desired effect in normal, everyday driving scenarios.”

Yet Work concedes that humans have one big advantage over adaptive cruise control systems: the ability to see several vehicles ahead. Adaptive cruise uses front-mounted radar detectors to watch the distance with only the next vehicle in the lane.

Even still, “adaptive cruise control systems don’t get tired or distracted, they’re consistently looking at the vehicle ahead,” says Ford Co-Pilot360 Technology Supervisor Michael Kane. “Plus, they are programmed to provide more consistent distances between vehicles so they can better respond to the speed and distance of the vehicle ahead.”