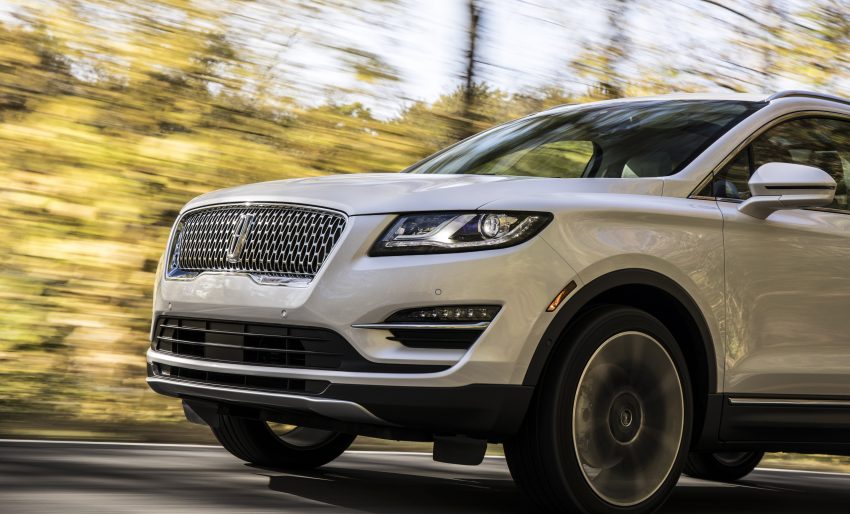 The utility vehicle market is booming, baby, and in an attempt to get while the gettin’s good, Ford Motor Company is revamping a sizable chunk of its SUV and crossover models, with the aim of having the “freshest” lineup in the industry by 2020. One of the many crossover models up for replacement is the Lincoln MKC, the new version of which could be called “Corsair”, and thanks to some recent spy shots, we’ve been given our first look at the all-new compact CUV.

The spy photographs, which are available on the Motor1 website, depict a C-segment utility vehicle clad head-to-toe in obfuscating camouflage with sculpture-hiding padding, but we can glean some details through the white-and-black patterned print. The downward-sloping roof line is reminiscent of that on the current Lincoln MKC, and the rear glass looks as though it could almost be the same piece, but the side glass doesn’t appear to have the same upward kink along the bottom edge.

Up front, the cutout for the grille is misleading, with a vertical divide that makes it look as though the split-wing grille is set to make a comeback. But rest assured, there’s virtually no chance of that happening now that Ford’s premium brand has found a new, decidedly-more-handsome corporate grille. The headlights are too well-obscured to tell us much, but as Motor1 notes, the wing mirrors bear some resemblance to those previewed by the Lincoln Aviator concept shown at this year’s New York International Auto Show.

Most titillating of all the details seen on this Lincoln MKC replacement prototype, however, is a small, strange elevated area on the front drivers side fender, which is likely a disguise for an EV charging port. With a Ford Escape Energi plug-in hybrid looking quite likely at this point, we might have guessed that Ford would put the same tech in its premium-branded Lincoln MKC replacement, but this is our first tentative confirmation.

Be sure to visit Motor1.com for the spy shots, and check back here for all the latest Ford and Lincoln news.