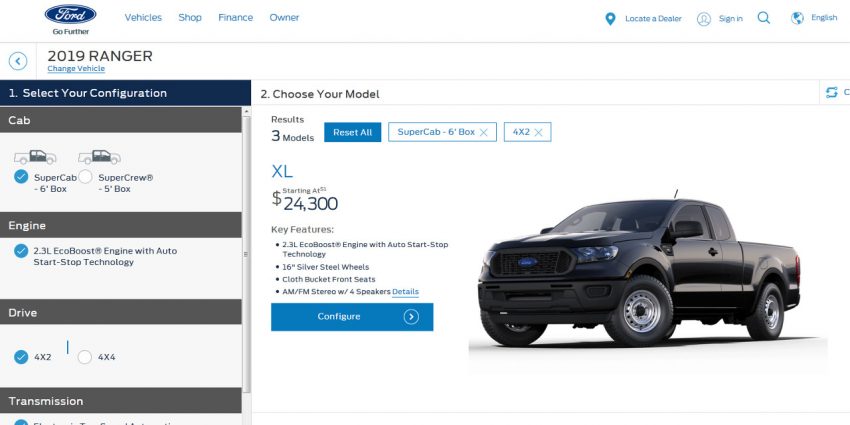 Ford Motor Company today officially launched the web-based Build & Price tool for the all-new, 2019 Ford Ranger in North America, revealing a $25,395 base starting price, including $1,095 destination charge. That matches the price tag spotted a week ago when Ford accidentally made the configurator accessible online for at least several hours, allowing multiple publications to get in and begin optioning out the midsize pickup truck.

That base MSRP will get you a 2019 Ford Ranger 4×2 SuperCab XL (there is no Regular Cab option on the North American truck) with a six-foot box. If you want four-wheel drive, you’ll have to spend a minimum of $29,555 for the 4×4 SuperCab XL, although prices can climb significantly higher than that; at the top of the range, the 2019 Ford Ranger 4×4 SuperCrew Lariat starts at $39,480 before options. Load it up with as many high-price features as you can and you’re looking at a $47,020 MSRP.

Of course, we have reason to believe the North American Ford Ranger could get even pricier in the future, as Ford is expected to bring its more hardcore, off-road-focused Ranger Raptor to the market in the not-too-distant future. That model doesn’t show up in Ford’s online Build & Price tool, but it’s been spotted testing in the US, with its steering wheel on the correct side of the vehicle, on several occasions.

To price out your own 2019 Ford Ranger in North America, you can find Ford’s online configurator here.