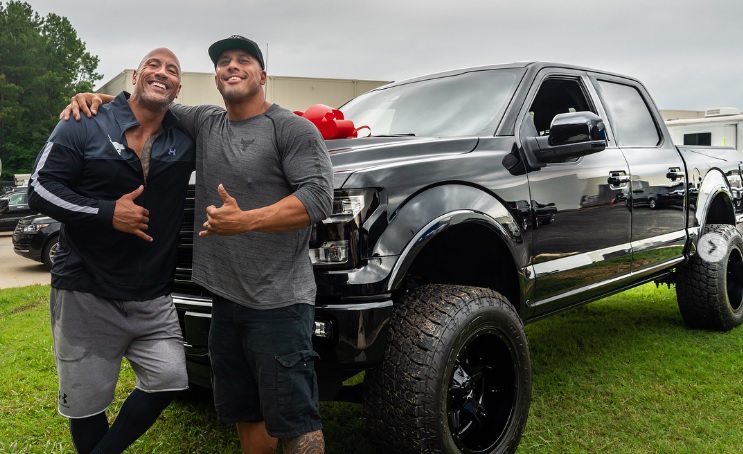 Being a stuntman for Dwayne “The Rock” Johnson can’t be easy. First, you have to look the part, and then you have to be willing to take a beating as a sub-in for the biggest action movies of the year. After several broken bones, severed tendons, and being honored as “Stuntman of the Year,” The Rock surprises his long-time stuntman and cousin, Tanoai Reed with a blacked out, jacked up, custom Ford F-150.

Ever since The Scorpion King came out in 2002, Tanoai Reed has been taking a beating. Performing stunts, making The Rock look good on screen. Although we as movie viewers don’t see all the dirty work that goes into making a movie, The Rock doesn’t let these blows to the body go unnoticed.

As a token of appreciation, Johnson organized a fake behind the scenes interview that would end with his stunt double’s jaw hitting the floor. The truck was hidden from view thanks to a well-placed Cadillac Escalade, but rolls away to reveal Reed’s new Ford F-150. When he hands the keys over to Reed, the reaction is priceless.

The Rock seems to have a knack for handing over the keys of new Ford vehicles to the people he cares about. Back in 2014 he gave a Ford Edge over to his housekeeper of ten years. Check this truck out for yourself and the reaction on Tanoai Reed’s face in the video posted above.