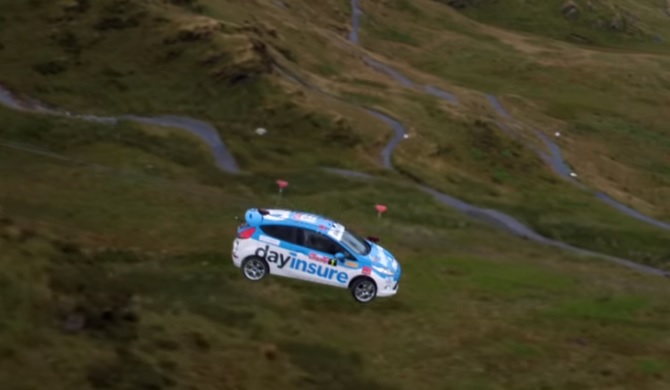 Adventure tourism has been taken to a whole new level with a Ford Fiesta rally car going full-send down a zip line in the mountains of north Wales. And it’s a helluva promotional stunt.

Dayinsure launched a Ford Fiesta rally car down a zip line to promote the UK’s forthcoming round of the FIA World Rally Championship, the Dayinsure Wales Rally GB. Dayinsure will be entering their third year as title sponsor for the highly-successful rally. For those of you who don’t know, Dayinsure offers short-term online car insurance on all kinds of vehicles. Find the irony yet?

The location of this madness took place on Slate Mountain, a tourist attraction known as Zip World in northern Wales. Dayinsure’s production of the #Skydriver viral video was not only a marvelous feat, but also played a huge marketing role. Not only for the sport of rallying but also tourism destinations in Wales.

This 90 second video features the leading British Championship Rally driver Matt Edwards strap in his Ford Fiesta and rip on a track after being sent down the largest zip zone in Europe. Watch all the action for yourself in the video posted above.