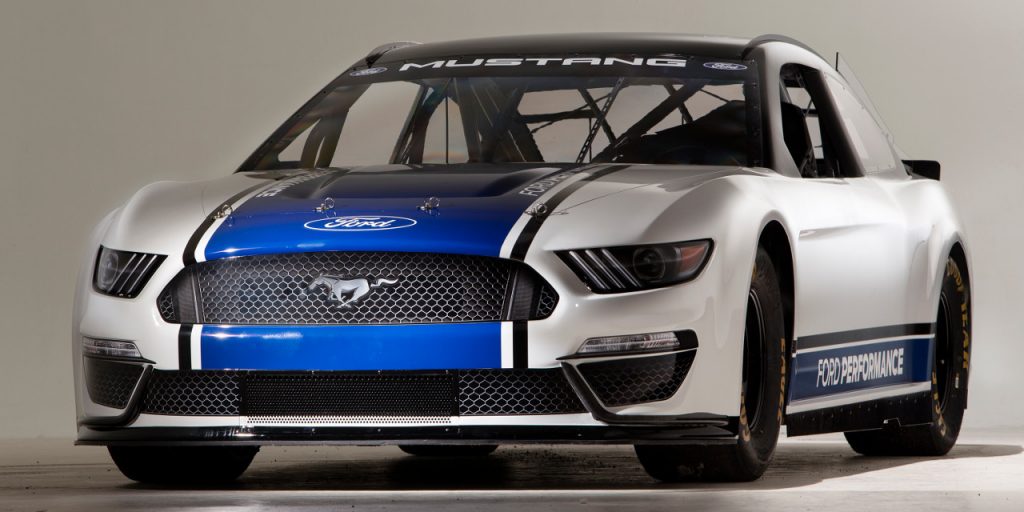 Ford Motor Company today unveiled its new Mustang stock car racer for the top-tier Monster Energy NASCAR Cup Series, which will make its on-track debut at the Daytona 500 this coming February. The 2019 season will mark the first time in the history of the Mustang nameplate that the celebrated pony car will represent Ford in the foremost stock car racing series in the world, although Mustang has been the face of Ford Performance in the lower-spec NASCAR Xfinity Series since 2011.

Ford’s Mustang stock car was unveiled wearing a white-and-blue livery with an oversized Ford logo on the hood. From the front, the car looks astonishingly close to the production version, with the same upper and lower grille shapes, accurate-looking headlamp and foglamp decals, and lower side inlets that look rather like the ones found on the 2019 Shelby GT350.

“Ever since we announced in April that Mustang would be going to the Cup level in 2019, we’ve heard nothing but positive feedback,” Ford Performance Global Director of Motorsports Mark Rushbrook says. “Our Ford Performance team has worked hard with the Ford Design team to create a Mustang that will be competitive on the track while remaining true to its proud heritage. We can’t wait to see it winning races in the NASCAR Cup Series next year.”

With the reveal of Ford’s new stock car for the 2019 Monster Energy NASCAR Cup Series, the Mustang is now one step closer to finally squaring off against Chevrolet’s Camaro pony car in NASCAR’s top-spec stock car racing spectacle. It’s an oval-track rivalry more than half-a-century in the making.