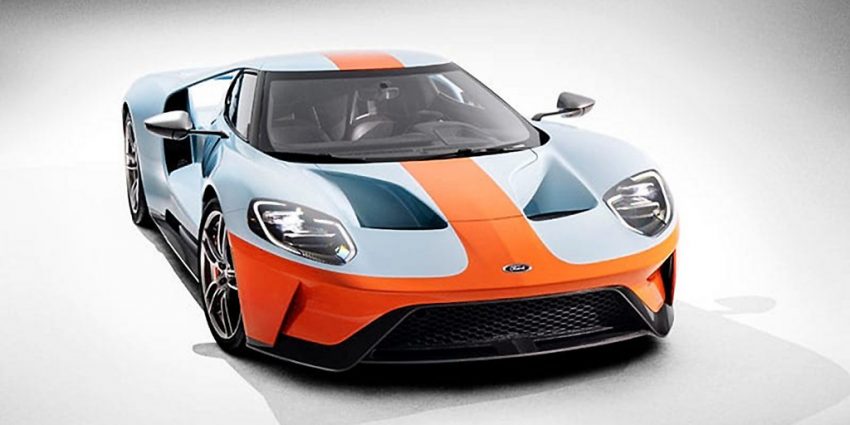 As special, exclusive, and nifty as recent iterations of the second-generation Ford GT Heritage Edition have been, the new-for-2019 version, which was unveiled late last week, has us in a tizzy. As well it should, because finally, at long last, Ford Performance has given its newest Ford GT supercar a Gulf Racing-inspired blue-and-orange paint scheme. It’s creamy, funky, nostalgic, and oh-so-photogenic.

“Many view the Gulf Oil paint scheme as the most famous in motorsports,” says Ford President of Global Operations Joe Hinrichs, in what we suspect might be an understatement. “The 1968 GT40 quickly became a global sensation after beating its European competitors on the track four times in a row, and in honor of the 50th anniversary of its win, we’re paying fresh tribute to the original with a new heritage limited edition.”

Chassis No. 1075 – the Gulf Racing-liveried Ford GT40 that won at the 1968 24 Hours of Le Mans – bears the distinction of being one of precious few chassis to win the race multiple times, achieving victory in ’68 in the hands of Pedro Rodriguez and Lucien Bianchi, and the following year in the care of Jacky Ickx and Jackie Oliver.

While we primarily covet the 2019 Ford GT Heritage Edition for its Gulf Oil paint scheme, the special model does feature additional enhancements over the standard GT, such as an optional package with exposed carbon-fiber interior and exterior graphics. These include No. 9 hood and door graphics, and a ghosted image on the interior door panels. The A pillars are also exposed carbon fiber, and unique, high-gloss dark stainless alloy wheels sit at all four corners. Ebony Alcantara can be found inside covering the seats, instrument panel, pillars, headliner, and steering wheel, while brilliant, contrasting blue and orange stitching highlights the seats and steering wheel.

Oh, and the brake calipers? They’re painted orange. How cool is that?

“We are delighted to partner with Ford to help the Gulf-themed Heritage Edition Ford GT become reality,” says Gulf Oil Lubricants India President Ravi Chawla. “The Ford Marque has played a major role in creating Gulf’s place in motoring and motorsporting legend and the same is true in reverse. Every Gulf outright victory at Le Mans has been Ford-powered and of course Gulf Ford GT40s took the latter two wins of Ford’s four consecutive victories at Le Mans from 1966-1969.

“What could be more fitting than both brands coming together to produce this fantastic motor car – the modern spiritual successor to the amazing Gulf-Ford GT40s that took Le Mans and World Championship honours.”