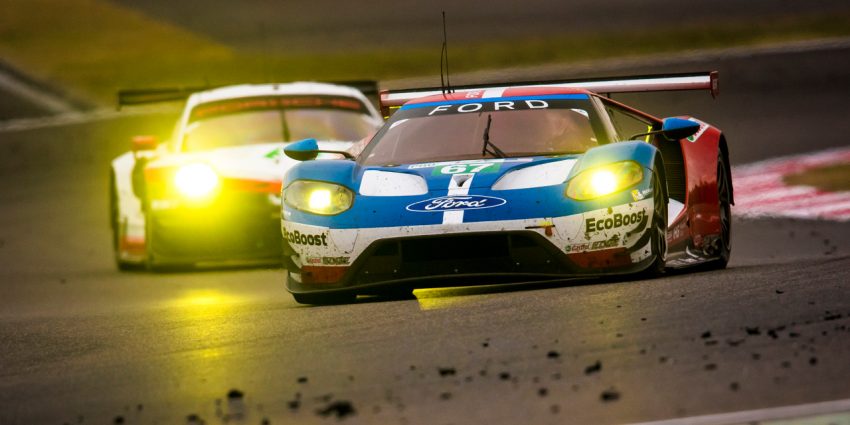 At Road America over the weekend, the No. 67 Ford GT race car of Richard Westbrook and Ryan Briscoe delivered Ford its fourth straight win in the IMSA WeatherTech SportsCar Championship GTLM class after qualifying second, despite being involved in three minor collisions during the course of the race. But where that car triumphed, the No. 66 Ford GT of Joey Hand and Dirk Müller had far worse luck, starting from pole but dropping back to seventh in the class after the car suffered an issue with the rear suspension.

With its win, the No. 67 Ford GT of Westbrook and Briscoe has taken the lead in the GTLM Team Championship standings, with four points separating it from the No. 3 Chevrolet Corvette C7.R. The No. 66 Ford GT, previously the championship leader, has dropped back to third, trailing five points behind the Corvette. Ford remains the top-ranking manufacturer in the 2018 season – a lead it’s held since the start of the season, when the No. 67 Ford GT won the Rolex 24 at Daytona.

The No. 66 Ford GT held the lead for several laps after the green flag, but suddenly, just a short time into the two-hour-forty-minute race, the right rear toe link encountered an issue that forced Dirk Müller to pull off for repairs. The No. 66 car lost its lead, and at the same time, the No. 67 Ford GT had problems of its own; a collision with a GTD competitor had damaged the left rear of the car. Driver Ryan Briscoe soldiered on, and by the end of the race, his teammate Richard Westbrook came away with the win, while the No. 66 crossed the line in seventh.

Despite his team’s tribulations, Müller was mostly up-beat following the race.

“What a race car,” the driver of the No. 66 Ford GT said. “I was smiling lap by lap. It was probably one of our best [setups] ever. I was able to really control the lead for a long time in the beginning, but without any warning sign, we had issues. That’s a tough one on our side to swallow… but at the same time our teammates won the fourth [race] in a row. I think that’s the upside. That’s why you’re a team. It’s a big swing in the points for us right now, but we have three races to go. Today was really good for the team.”

The next event on the IMSA WeatherTech SportsCar Championship calendar is the Michelin GT Challenge at Virginia International Raceway, August 19th.