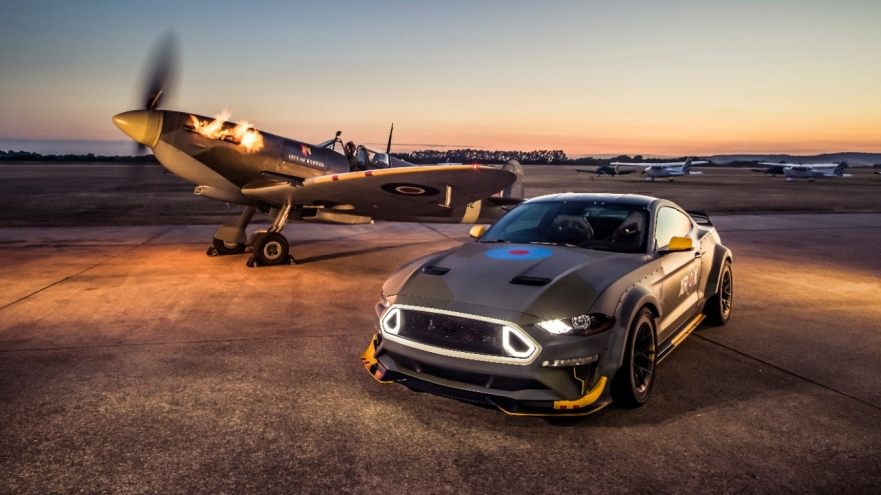 Imagine hanging out at Woodward and drift legend Vaughn Gittin Jr. walks up and hands you the keys to a 700 hp Ford Mustang. Not just any Mustang, but a one-off Eagle Squadron Mustang GT. For one high roller, that was just apart of their reality.

Weeks before the Woodward Dream Cruise, this jet-like Mustang was being auctioned off at an annual charity event hosted by the Experimental Aircraft Association (EEA). All proceeds would be donated to the association’s youth education programs, which encourage and support the next generation of pilots. Brayton Williams was the largest supporter of the night, laying down a top bid of $420,000.

Not only did Brayton keep the dream of aviation alive for the youth but also he became the new pilot of the Eagle Squadron Mustang . It just so happens that 2018 marks the 20th year Ford has supported the EEA and they went all-in with this Mustang. With a little help of Vaughn Gittin’s RTR vehicles as well.

Gittin actually built this car with Ford’s design team before taking it to the summit at Goodwood Festival of Speed in the U.K. this year. The Eagle Squadron Mustang GT is unique with its camouflage paint job to match the original Eagle Squadron Spitfire aircraft. Also featured is Gittin’s Mustang RTR carbon fiber wide-body kit and a complete design package. Under the hood making the car produce 700 hp and 610 lb-ft of torque is the Ford 5.0-liter V8 with a Ford Performance supercharger kit.

On top of winning the one-off Mustang, Williams was invited to attend the 2018 Ford Woodward Dream Cruise where he was greeted by Gittin with the keys to his car and got to drive it for the first time. It sounds like a priceless series of events was had for the pilot of this special Mustang.