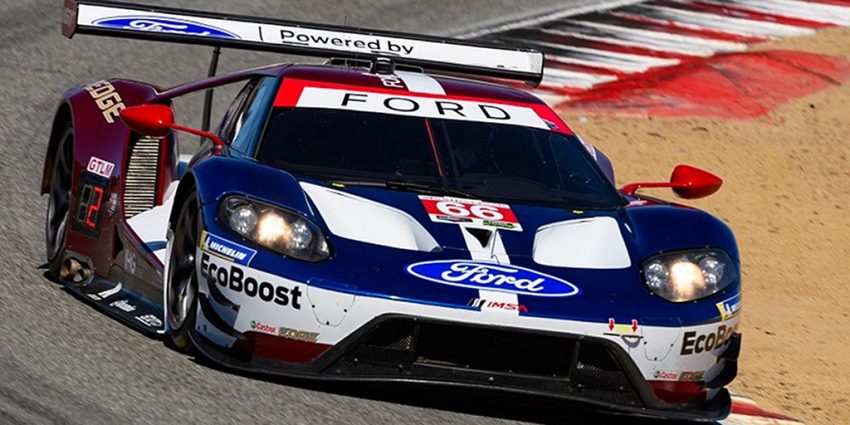 Corvette Racing’s No. 3 Corvette C7.R has managed to extend its lead over the No. 66 and 67 Ford GT racing teams in the 2018 IMSA SportsCar Championship, as difficulties plagued both Ford teams and resulted in sixth- and seventh-place finishes at the Continental Tire Monterey Grand Prix at Laguna Seca. As soon as the green flag fell, the No. 66 Ford GT got caught up in a crash prior to crossing the start line, as a Cadillac DPi was struck by another prototype and spun into the middle of the track. The No. 66 wasn’t able to evade in time, striking the car and incurring massive damage that relegated it to the pits.

Working diligently, Ford Chip Ganassi Racing managed to get the car repaired in time to go back out and race with roughly an hour left on the clock, but the No. 66 Ford GT completed just two laps before retiring for good, securing seventh place in the process.

The No. 67 car wasn’t involved in the pre-race crash that all but removed the No. 66 from the race; its crash came much later, forcing it into the pits for repairs to its steering. It completed a total of 71 laps throughout the two-hour, forty-minute race, finishing behind most of the GTD field, but claiming sixth place in its GTLM class.

“What a drama at the start,” said driver Dirk Müller, who was at the wheel of the No. 66 Ford GT at the time of its unfortunate crash. “Basically, I had the perfect start and I got penalized for it because I was right at the back of the prototypes there and there was nowhere to go. I was really happy with my start and had a smile on my face, and then the prototypes were wrecking in front of me and I had nowhere to go. The right side was blocked and there was a little gate on the left. I thought I could make it and it was my only hope. Our Ford CGR guys did a great job getting us back out.”

Heading into the final round of the 2018 IMSA WeatherTech SportsCar Championship, the No. 67 Ford GT is now down by 9 points relative to the No. 3 Chevrolet Corvette C7.R, with the No. 66 Ford GT down by 15. There is a silver lining, however; Ford Performance seems poised to take the manufacturers’ title, as the No. 66 and 67 teams split the No. 3 and 4 Corvette entries in the championship standings.