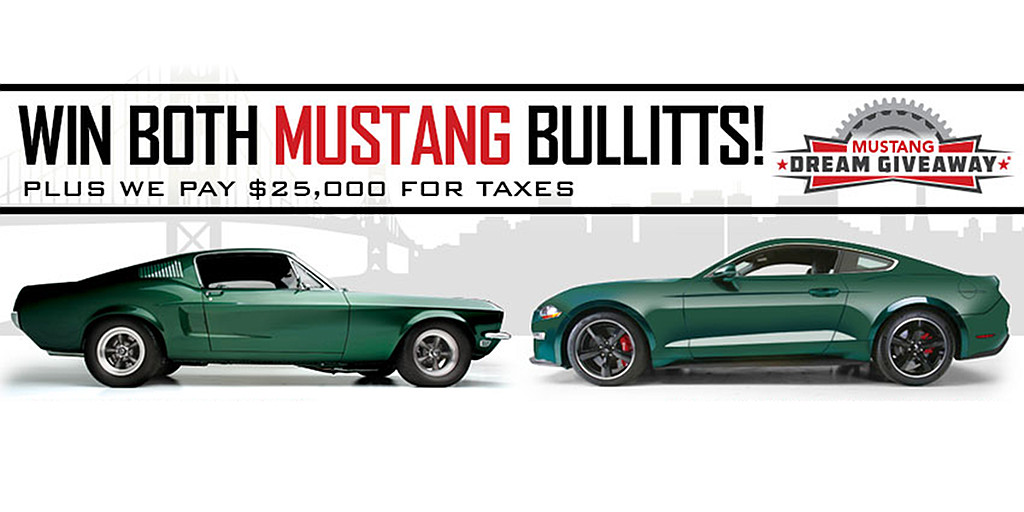 For 2019, there’s an all-new version of the Ford Mustang Bullitt Edition – the limited-release pony car model that pays homage to the 1968 Steve McQueen film Bullitt and its famous nail-biter of a chase scene through the streets of San Francisco. It’s arguably the coolest car in the current Ford Mustang lineup, but if the $47,495 starting price is a bit steep to justify, there might be a cheaper alternative available.

This year, Dream Giveaway is raffling off a pair of Bullitt Mustang pony cars: a brand-new 2019 example, and a beautiful recreation of the original movie car, built from a real 1968 Mustang. The cost for a single ticket is just $3, and there’s a price break when you buy more, with five tickets costing $10, 20 tickets costing $25, and so on, up to a colossal 7,200 tickets for $5,000.

All of the proceeds from Dream Giveaway’s ticket sales will go to charities supporting children, veterans, cancer sufferers, the homeless, and victims of natural disasters.

The brand-new, 2019 Bullitt Mustang being raffled as part of the Dream Giveaway package deal is painted Dark Highland Green – the only appropriate color for a proper Bullitt homage – and has been optioned with a six-speed manual transmission. The standard, 480-horsepower 5.0L Coyote V8 is present and accounted for, and the Bullitt Technology Package and MagneRide suspension are both included.

But Dream Giveaway Garage didn’t stop there, installing genuine Ford Performance parts not included on the factory car such as a short-throw shifter, lowering springs, and strengthened half shafts.

If there’s one thing that pairs well with a 2019 Bullitt Mustang – apart from Steve McQueen’s dapper jacket and black turtleneck – it’s a faithful recreation of the original hero car from the film. The folks at Dream Giveaway Garage have sourced just such a car, starting with a 1968 Ford Mustang and a classic 390-cubic-inch V8 with dual four-barrel carbs. The engine is tied to a five-speed manual, and exhausts its spent gases through a “muscular” dual exhaust.

Intrigued? Visit the Dream Giveaway website to purchase your raffle tickets and enter for a chance to win.