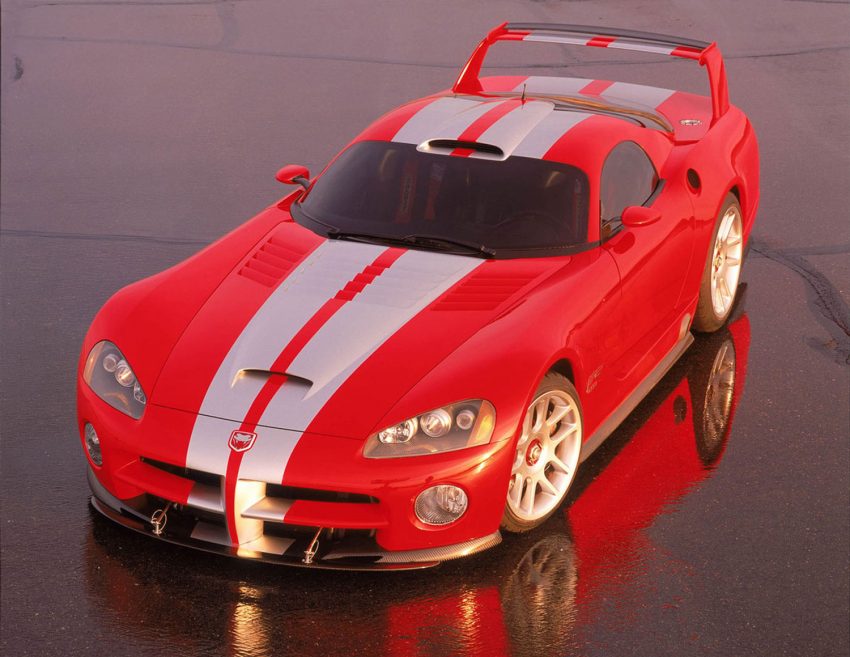 There are some cool sports cars out there that to this day car folks are still a bit surprised that the manufacturers produced. One of the most memorable of those surprise sports cars was the Dodge Viper, and another is the Ford GT, not only in its current high-tech configuration but also in its original mid-2000s from that marked the return of Ford to high-end sports cars after decades away. Interestingly, those two cars are more related than anyone might have thought considering they were from rival automakers. According to Hagerty, the Chrysler mid-engine Viper program that never became a production car was the basis for the mid-2000s Ford GT.

In that mid-2000 era, Chris Theodore was the Chrysler General Manager of the small car platform for Chrysler engineering and was the man who the Viper team reported to. The story started in the mid-1990s when the Viper was the Dodge halo car. Theodore says that some of the execs at Chrysler had Corvette envy, and Chevy had tried a few times to build a mid-engine Vette. That envy meant that Chrysler kicked off a packaging study for a mid-engine Viper in May 1996 with Roy Sjoberg as the chief engineer. The project started with two wooden bucks being built with one of those bucks exploring a reverse engine layout with the engine rear facing with a forward facing transmission and gearset. The other buck was a more conventional forward-facing engine with a transaxle behind it. These wooden bucks were intended to show the team how much of the existing Viper components might be usable in a new mid-engine car. After an analysis of the pros and cons for each of the potential layouts met with the need to design a third-gen Viper, the product became more serious with the need to determine what Chrysler would have to invest in the car and what the variable cost would be. Theodore notes that the assumption in these design studies was that as much of the existing Viper had to be used as possible.

The most significant expense in the mid-engine program would have been the transaxle, it had a potential cost of several million dollars more than the forward-facing transmission approach, but Theodore noted that the price wasn’t “catastrophic.” The thought was that the in-house parts supplier for Chrysler, called Acustar, could build the transaxle and help keep costs down. At this point, the engineering team for the mid-engine Viper was eight people, and two chassis were made using lots of existing Viper parts, including body panels, with the intent of determining the packaging, proportions, and physical volume for the car. These used the existing Viper front suspension, and steering, the version with the transaxle in it used the entire instrument panel and the V10 engine from the existing Viper.

Both of these early studies moved the H-point (described as where the driver’s hip is located relative to the chassis) down, moved the seats forward, and lowered the hood along with increasing the wheelbase. Eventually, in October of 1996, a presentation was put together on the status of the project that included the bucks that were made, competitive Ferraris, and a dressed-up Viper with its body panels reconfigured with the lowered hood, and stretched wheelbase that was painted in gray primer according to Theodore. He notes that then Chrysler president Bob Lutz wasn’t as interested as the mid-engine Viper crew had hoped and the head of Chrysler design, Tom Gale, was described as lukewarm on the project as well. Eventually, when Daimler-Benz purchased Chrysler in 1998, the project died altogether.

Theodore eventually left Chrysler for a job with Ford noting that when he left Chrysler, he was still frustrated over not getting to do the mid-engine Viper. Theodor said that the Viper was a rip off of the Cobra and that Chrysler ripped off Ford’s heritage for the Viper Coupe, the thinking at Chrysler was that the GT40 was Ford’s best heritage and that the mid-engine Viper would be ripping off Ford’s best. He said the best place to build a new GT40 was at Ford and that Ford had tried many times to make a homage to that original iconic car, but the project was always canceled. Theodore eventually pitched the idea on a plane ride in 1999 as part of a team sent to close the deal where Ford purchased Volvo.

He says that Former Ford CEO and president Jac Nasser, Richard Parry Jones, the former VP-Global Product Development, CTO, and head of Global R&D Operations, and the entire executive management team were on the flight and that when the GT40 idea was pitched, they all got excited and said “we need to do this.” That pitch led to the start of the modern GT40 and let Theodore finally fulfill his mid-engine sports car aspirations. That original mid-2000s Ford GT later turned into the iconic current version of that same name, both considered to be some of the best sports cars Ford has ever produced.