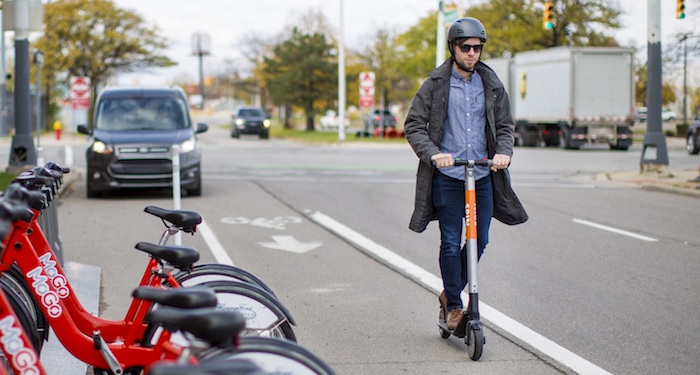 Last month, Ford Motor Company acquired e-scooter and mobility company Spin for $100 million. The acquisition was representative of Ford’s new found desire to be not just a motor company, but a mobility company as well.

Now Ford is expanding Spin’s efforts. The company just deployed 100 e-scooters in Austin, Texas, according to local NBC affiliate KXAN, and will eventually have more than 400 of the so-called “last-mile” transportation solutions on the city’s streets. Furthermore, Spin has plans to expand to 100 cities across the US over the next 18 months.

The city of Austin allows one single scooter company to have up to 500 scooters in the city’s perimeter, so Ford won’t be able to have more Spin scooters any more than that on Austin streets. The city does not limit the amount of scooter companies that can operate there, either, so the automaker’s newly acquired scooting company will have a lot of competition in the region. That includes from the two biggest names in shared scooting, Bird and Lime. According to data acquired by KXAN, more than 275,000 scooter rides were taken in Austin in October alone.

When the Ford-Spin acquisition was first announced, the automaker said it was interested in buying Spin as it does not launch its scooters without permission. The company says its also “committed to working hand-in-hand with cities and universities to implement micro-mobility solutions,” and sharing usage data with cities to help them better understand the ways we get around.

Ford says a Spin scooter will cost $1 up front to rent plus an additional 15 cents per minute of ride time. That makes it a fairly inexpensive way to get around, we must admit, and is definitely more economical than taking a cab or Uber.