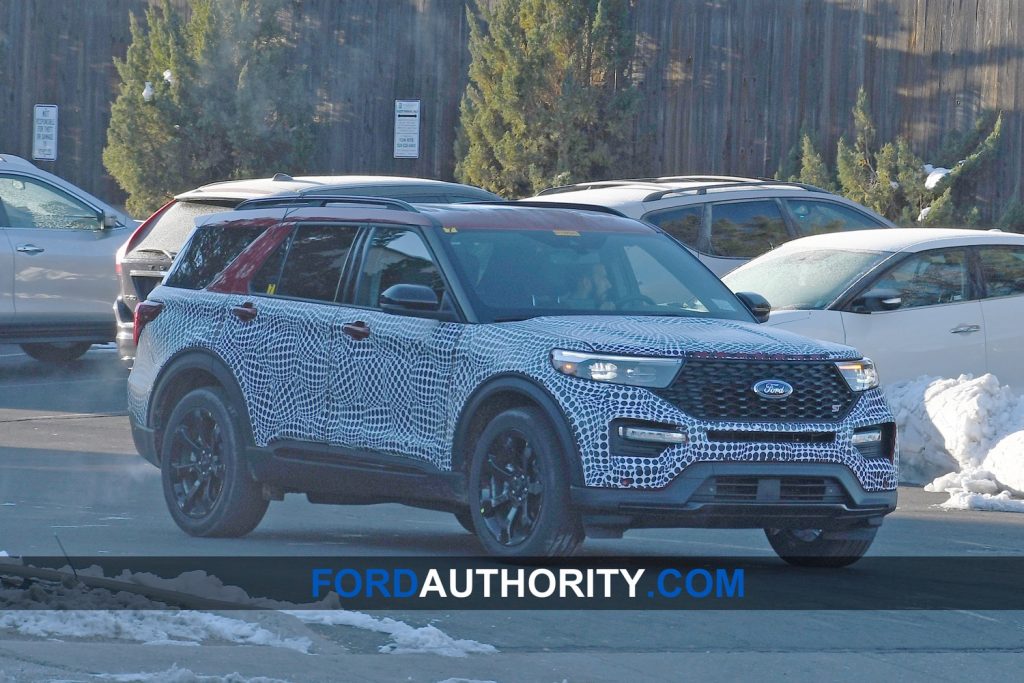 We’ve already shared with you all kinds of info on the upcoming, all-new 2020 Ford Explorer, including spy shots of the exterior and interior. What we haven’t seen before is the 2020 Explorer ST – the more potent variant of the full-size crossover SUV. But our eagle-eyed spy photographer managed to catch up to a minimally-camouflaged prototype of the model as it was undergoing testing in Colorado, allowing us this early look. The 2020 Explorer ST will replace the Explorer Sport in Ford’s lineup, much like the Edge ST replaced the Edge Sport. Power is expected to come from one of two engines: a high-output variant of the Ford 2.7L EcoBoost V6 making at least 335 horsepower, or the 3.5L EcoBoost V6 making 375 horsepower. Both gearboxes are expected to be mated to the new Ford 10-speed automatic transmission driving all for wheels via an all-wheel-drive system. Besides the more potent powertrain, we also expect the 2020 Explorer ST to feature a more athletic suspension and more aggressive styling elements. Though we can’t tell what’s going on in the suspension department, the spy pictures show a black grille treatment, black wheels, a black insert on the lower edge of the doors, body-color door handles, and a quad exhaust treatment. These elements will be finished in a bright material on other, non-ST 2020 Explorer models.

And if there is any doubt that we’re looking at the 2020 Explorer ST, then a look at the grille and liftgate reveals a set of red ST badges. The Ford Explorer will be completely new for the 2020 model year. It will ride on the new CD6 platform that is flexible to support front- and rear-wheel drive configurations, along with their respective all-wheel-drive derivatives.

Expect the Blue Oval to reveal the 2020 Ford Explorer in the coming months, potentially at the Detroit Auto Show this coming January.