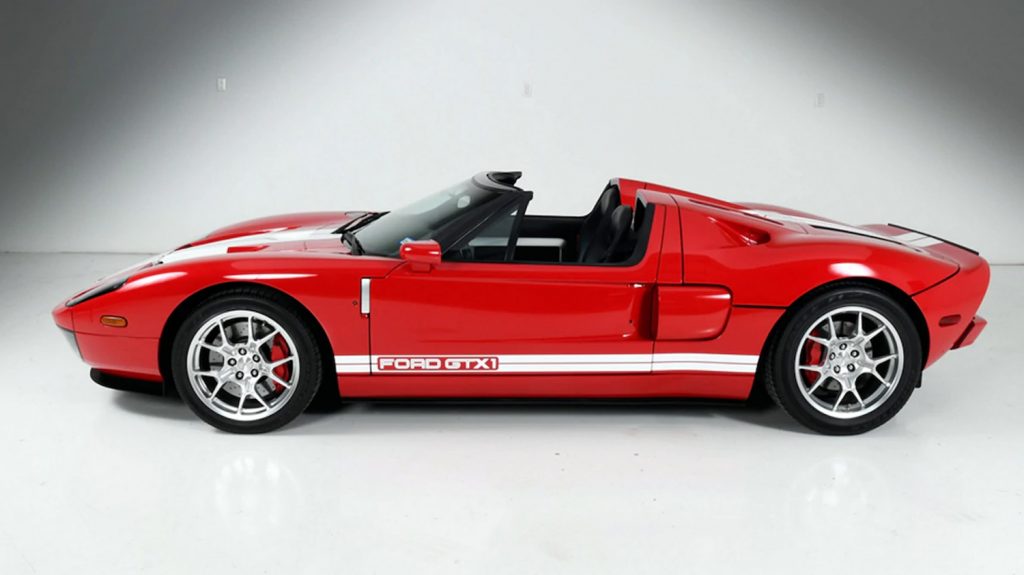 If you are a fan of the previous generation Ford GT from the mid 2000’s and have money burning a hole in your pocket, get down to the Barrett-Jackson auction in Scottsdale, Arizona later this month. The auction will have eight first-generation cars up for sale when it kicks off with some of them having been driven a bit, some being garage queens, and some having a bit of modification done to them. You won’t need to fly a banner over Ford HQ to get permission to buy one of these last-gen cars, just bring your well-funded checkbook.

MotorTrend reckons with eight cars on offer at the auction with no reserve, someone wanting a Ford GT might get a bit of a bargain on one of the cars. One of the most interesting at the auction is a red with white stripe 2005 Ford GTX1 Roadster. The GTX1 is an aftermarket conversion that took a normal GT and hacked the roof off it to create a roadster meant to remind of the GT40 roadster prototype from the 1960s. The GTX-1 isn’t a car made by some fly by night company; Ford supervised the production of the 100 GTX-1 Roadsters produced. A pair of red paint with white stripe cars will be offered with a 2005 with only 52 miles and 2006 that has seen a bit of road time with 2,746 miles. On the modified GT front, a 2006 Tungsten Gray with no stripes and 607 miles on the odometer features an upgraded supercharger, and a white with blue stripe 2005 model that has been modified with side scoops and blue wheels, and a power bump to 850hp will both cross the auction block. That latter car has a carbon-fiber rear diffuser, Euro bumper conversion, and a reverse clamshell kit. There is no word on what any of these cars might bring when the auction kicks off January 15. A Ford dealer out of Illinois has a never titled 2005 Ford GT for $449,900 that has 104 miles on the clock, none of the cars at auction are likely to bring that kind of money.