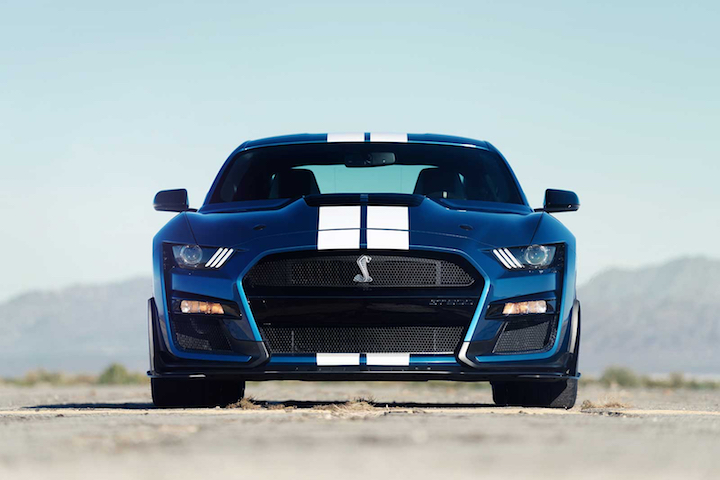 The wait is finally over, and Ford officially released the 2020 Shelby GT500 at the North American International Auto Show in Detroit on Monday. We want to break down the five things that we think that you should know about the baddest, bestest, more powerful (street-legal) Ford ever built. Under the Hood, Mechanical

The 2020 Mustang GT500 will come with a 5.2-liter V8 engine paired to a 2.65-liter Eaton supercharger. The 5.2 is derived from the Voodoo motor found in the Shelby GT350/GT350R but will have a cross-plane crankshaft, as opposed to a flat-plane crank found in the 350 variants. The GT500 will have more than 700-horsepower according to Ford, but no specific number has been released. We’re frustrated about this, but also glad that it aligns with the GT500 predictions we made back in December.

A seven-speed dual-clutch transmission sourced from Tremec will be the only available transmission. The dual-clutch will deliver quicker shifter times than any manual, and aligns with the ‘fastest ever’ mentality associated with the GT500. The automatic transmission will allow drivers to select between normal, weather, sport, drag and track mode, and will also have line-lock and launch control for the strip. Oh, and a carbon fiber drive shaft is included to help manage all of that power. For purists, the GT350 is the more driver-centric car, and the GT500 will be the car to set lap times and records at the drag strip. There will be a more common, and less expensive ‘Handling Package’ that will come with a more subtle spoiler, less aggressive wheels and Pilot Sport 4S tires, and the heated and cooled seats currently found in the Mustang GT Performance Pack 2. Oh and back seats for the kids. If everyone could afford the new Shelby GT500, everyone would (probably) buy one. Although pricing has yet to be announced, we are predicting sub-$100K window stickers on Carbon Fiber Track Package models. As for standard Handling Package models, we are hoping to see prices in the $70-80K range. That’s before any dealer mark-ups, which, unfortunately for many, will likely be hefty for the first year or two of production. Unlike the Ford GT supercar, there will be no application process, and the new GT500 can be ordered from your local Ford dealer like any ordinary Mustang.

So who does Ford think will buy the new Shelby? A Ford representative told us that, “unlike previous GT500 [models], this [one] will draw in [customers] from other competitors going left and right.” He means to say that for the track rat looking for a monster to take on a road course, look no further. The 2020 Shelby GT500 is the fastest Mustang ever made, and Ford says it will do everything well. For customers looking to stick to the drag strip, the GT500 is your car, too. Ford says it’s for the, “biggest, baddest, bestest person,” and of course, die-hard Shelby fans.

Unfortunately we don’t know every stat about the 2020 Shelby GT500 at the time that this is being written, but here is what we do know:

Why The Old Headlights?

Ford says that there were a couple different reasons why the 2020 Shelby GT500 will receive the 2015-17 headlights. Carl Widmann, Chief Engineer for Ford Performance explained to us how the GT500 takes advantage of a carbon fiber grille opening reinforcement piece. This piece holds together the headlamps, front fascia, several cooling components, and the hood pins. The reinforcement piece has a complex structure but manages to keep weight low thanks to its carbon fiber construction. It’s design was not adapted to the 2018 and newer headlights.

Additionally, Widmann told us that because the GT350 and GT350R both use the ’15-17 headlights in newer than 2017 models, Ford wanted to keep the appearance consistent for their high-performance Mustang variants. Hence giving them to the new Shelby GT500.

We don’t know it all yet, but we do know that the 2020 Shelby GT500 is going to be a stunner. Personally, we want to stop writing about the thing and just drive it. For consistent updates about the Shelby GT500 and all things Ford, subscribe to Ford Authority here.