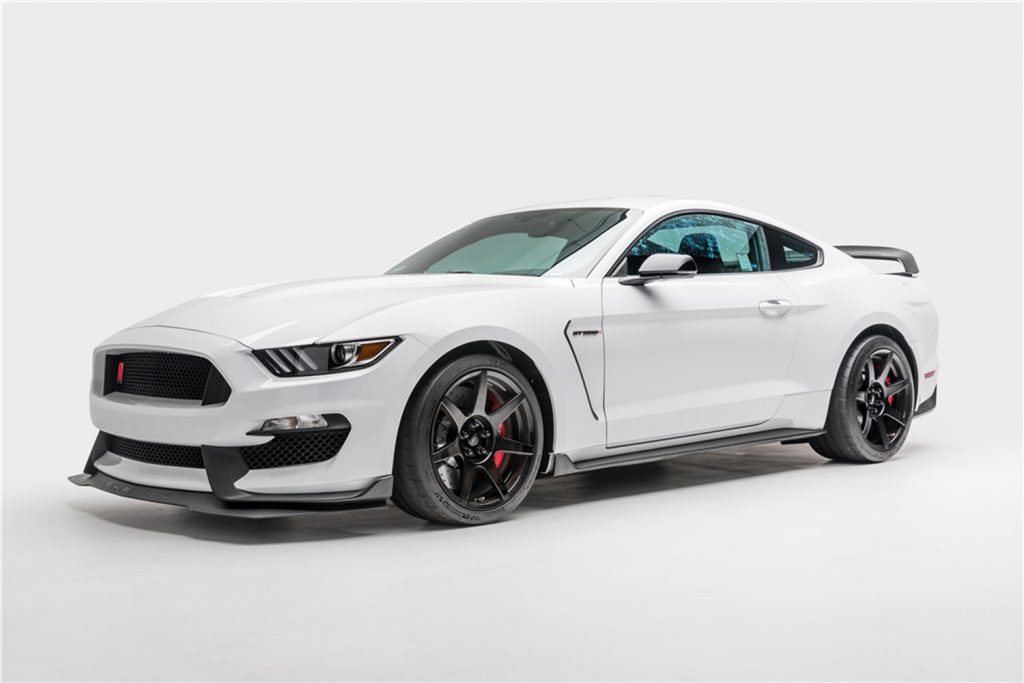 There were just a tiny handful of the cars that came with VINs that designated them as 2015 model year Ford Mustang Shelby GT350, but you had to be someone special to get your hands on one of those. The rarest of the rare was the 2015 Shelby GT350R; Ford only made 37 units of that car designated as 2015 models (along with 100 2015 GT350s), and the reason only 37 GT350R units were built has to do with Shelby lore.

In 1965, Shelby American only made 37 R-Model units of the Ford Mustang GT350; Ford wanted to do the same for the 2015 model. The 2015 GT350R was offered only to Ford family and special folks that had to know someone important at the automaker to have the opportunity to purchase one of these cars. The ride you see in images here was purchased new by prominent California car collector Bruce Meyer, and is said to have sat in a position of honor in Meyer’s famous Beverly Hills garage amongst the rare racing and collector cars Meyer is known for. Like all Shelby GT350R Mustangs, this one has a 5.2L flat-plane crankshaft V8 engine making 526 horsepower at 7,500 rpm, and the suspension of the car features Shelby specific Ford MagneRide adjustable dampers. Power from that fancy 5.2L V8 engine goes to the ground via a 6-speed manual transmission after making its way through a Torsen limited-slip differential fitted with 3.73 gears. And to get this rocketship to slow down on the track, Ford fitted the car with track-spec Brembo brakes. One of the highlights of the GT350R were the carbon fiber wheels that are wrapped in Michelin Pilot Sport Cup 2 tires. Those fancy carbon fiber wheels won the GT350R a “Best of What’s New” award from Popular Science back in 2016.

Meyer optioned this Oxford White GT350R with the GT350R Electronics Package that added Sync3, a 7-speaker sound system, dual-zone automatic air conditioning, and navigation. Noticeably missing from this car are the stripes that were factory fitted to the vast majority of GT350R Mustang’s, this car appears to have been ordered from the factory with the stripe delete option. Meyer left the protective delivery plastic on the car’s sill plates and carpeting — he never bothered to open the floor mats still in their factory packaging in the trunk of the car. The sale includes all original purchase documents, owner’s manual and supplements, both key fobs, a replacement oil filter and special wrench, and an exclusive presentation box that included a small metal replica of the flat-plane crankshaft along with limited edition art prints. Only 200 miles are on the odometer of this 2015 GT350R, and some of those miles were likely put on the car driving it to the dealership to have the factory safety “Engine Oil Cooler Tube Assembly Replacement” performed in 2017 to prevent the risk of fire if the original oil cooler tube came loose.

The car is being auctioned off by Barrett-Jackson at its 2019 Scottsdale auction at approximately 6:30 P.M. MST on Friday, January 18, 2019, with no reserve. Barrett-Jackson notes that 100% of the hammer price will be donated to the Petersen Automotive and Henry Ford Museums. No estimates for final sales price are offered, but consider that a less rare 2017 GT350R was going for $110,000 new at a Ford dealership after a $40,000 market adjustment was tacked on, this car is likely to bring considerably more than that amount.