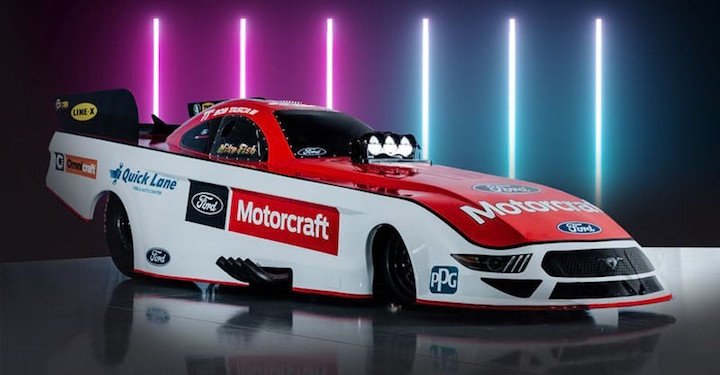 This new Funny Car body is the first new Nitro-powered car for Ford in a decade. Interestingly, the Dearborn-based automaker says its also the first Ford race car to skip the full-size prototype phase of development, with computer simulations and lab and bench tests now enough to develop a race car from start to finish. Ford says skipping the full-size prototype development phase “has significant cost reduction implications for both road and race vehicle design.”

“We have the utmost faith in our computational fluid dynamics software and its ability to overcome such small margins for error, which allowed us to create this new racecar without the need for full-scale prototypes,” explained Ford racing boss Mark Rushbrook.

“When our new Mustang Funny Car hits the track in 2019, we fully expect it to validate the motorsport development tools we’ve worked hard to create and refine,” he added. “When you’re discussing the realm of speeds exceeding 300 miles per hour, tolerances in aerodynamics become miniscule. Even the slightest change can have a massive effect. Working in such a focused space allows us to gain insight to aerodynamic improvements for both our racing and road cars.” The Funny Car doesn’t look much like a real Mustang.

Ford says this new Mustang Funny Car body “seeks to become the fastest Mustang ever,” when it enters competition later this year. It will be fielded by Bob Tasca III’s Motorcraft/Quick Lane NHRA Funny Car team, along with Tim Wilkerson’s privateer team. The first on-track opportunity for the Mustang Funny Car body will be the official pre-season test this week in Phoenix.

Tune into the NHRA Funny Car series this year to see if the new Mustang Funny Car body will indeed become the fastest Ford Mustang ever.