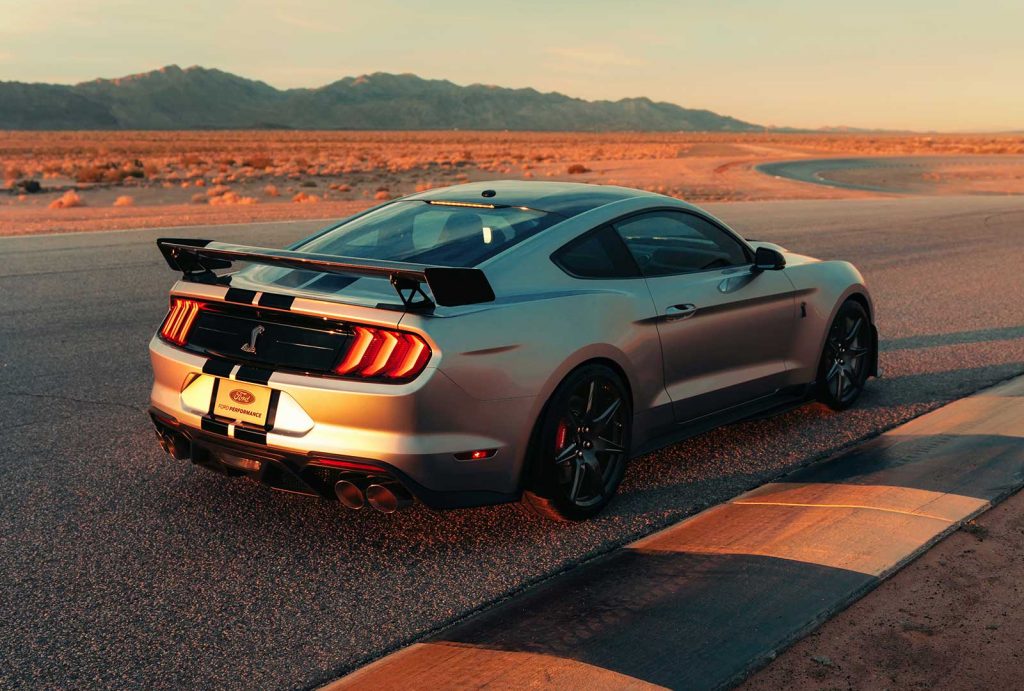 The 2014 Shelby GT500, with its 662 horsepower, was capable of an amazing 202 miles per hour, and Ford bragged about it extensively. Essentially, it was the Dodge Challenger Hellcat before its time. And it turns out that the last generation Mustang will still be the fastest built to date. Because despite having record power levels, the new 2020 Mustang Shelby GT500 is slower than its predecessor. At least in a straight line.

For the 2020 Mustang Shelby GT500, Ford is focused on road course performance – emphasizing corner entry and exit speeds – rather than a top speed record. It’s a completely different kind of pony. As a result, the new GT500 has loads more downforce than the previous model, and that by nature will drag the car down at extreme speeds. So despite being the most powerful production car Ford has ever created, the 2020 Mustang Shelby GT500 is governed to just 180 miles per hour.

Most powerful and fastest don’t mean the same thing. The 5.2-liter V8 engine in the 2020 GT500 is paired to a 2.65-liter Eaton supercharger and produces “more than 700 horsepower” according to Ford.

The 5.2L is derived from the Voodoo motor found in the Shelby GT350/GT350R but will have a cross-plane crankshaft, as opposed to a flat-plane crank found in the Mustang Shelby GT350 variants. Ford is still being stingy about exact power figures, but we aren’t too worried about its overall performance. Plus, the 7-speed dual-clutch transmission will shift quick enough to get the new GT500 to accelerate from zero to 60 in the mid threes, and the quarter mile in less than 11 seconds. That should help you forget about its restricted top end performance.

It’s tough to top the 202 mph performance of the 662 horsepower 5.8L “Trinity” DOHC V8 that Ford stuffed in the 2013-14 Shelby GT500, but we think that the lap times from the new car will be enough to silence the haters. If you need a refresher, we broke down the five things that we think that you should know about the most powerful (street-legal) Ford back in January following Ford’s announcement of the new car at the Detroit Auto Show.

Ford and Shelby fans should be reminded that not all modern track-focused cars can achieve 200 miles per hour. In fact, one of the most recognizable track cars in the industry – the Porsche 911 GT3, will only reach 193 mph. It’s souped up sibling, the GT3 RS is also restricted to 193 mph.

We can try and reassure you all day long that the 180 mph governor on the new Shelby GT500 shouldn’t matter too much, but that wont change the fact that the Chevrolet Camaro ZL1 (which is currently on sale) will do 202 mph. The 2020 Shelby GT500 goes on sale this summer.

Power figures for the 2020 Mustang Shelby GT500 are still not official, but expected to be north of 700 horsepower.

For more updates about the Shelby GT500 and all things Ford, subscribe to Ford Authority.

Ford 3D Printing Technology More Autonomous Than Ever Before