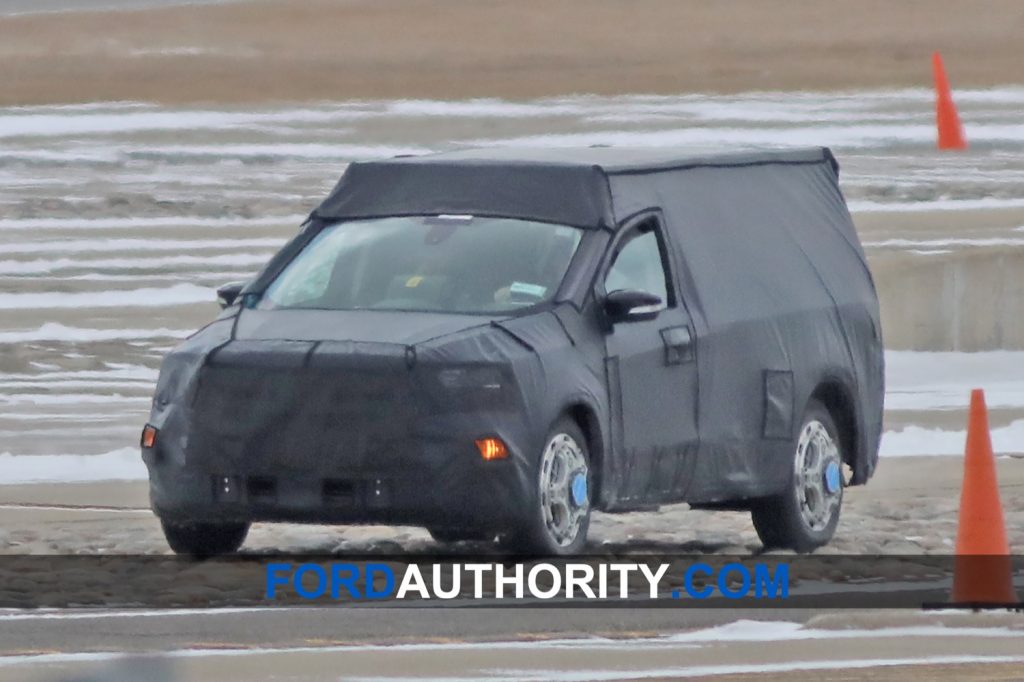 In December, Ford Authority was first to report that Ford was working on a compact pickup that will slot under the midsize Ford Ranger and be called Ford Courier. A few days later, spy photos showed an early prototype of that very vehicle undergoing testing, followed by a confirmation of the model in January. And now, a new set of spy photos reveal more about the upcoming Courier as it was testing at Ford’s proving grounds in Michigan. Ford is continuing to develop the model while cladding it with a significant amount of camouflage that attempts to disguise the prototype as a van, complete with a fake high roof, barn doors, and a sliding rear door on the passenger side of the vehicle. None of that fools us, though, as we know for sure that the vehicle seen here is Ford’s forthcoming car-based pickup. The most noteworthy element here is an independent rear suspension, which makes sense given that the Ford Courier will share the new Ford front-drive platform introduced by the all-new 2019 Ford Focus. The photos also show a new dual exhaust setup as well as a better look at the configuration of the rear taillamps.

The Ford Courier is expected to reach the market in 2020 as a 2021 model year vehicle, slotting below the midsize Ranger as a compact pickup.

It will ride on Ford’s new unibody platform shared with the new Ford Focus. Two- and four-door configurations will be offered. Power will come from a Ford EcoBoost turbo four-cylinder gasoline engine driving the front wheels via the automaker’s new 8-speed automatic transmission. All-wheel-drive is doable from an engineering standpoint, though we’re not sure whether it will be offered. A hybrid model is possible. Production of the 2021 Ford Courier expected take place at the Ford Cuautitlan plant in Mexico. The facility, one of several Ford Mexico plants, is currently home to the Ford Fiesta range.

The Ford Courier will take on other compact unibody pickups such as the new Fiat Toro and Chevrolet Tornado/Montana, sold in Latin America. But unlike the Chevy and Fiat, The Blue Oval is expected to offer the Ford Courier in the United States.