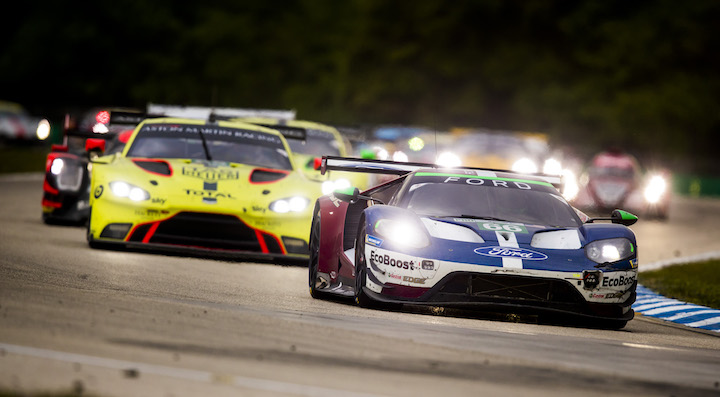 The No. 66 and No. 67 Ford GT entries of Ford Chip Ganassi Racing Team UK finished Friday’s FIA WEC 1,000 Miles of Sebring in 11th and third, respectively.

The No. 66 Ford GT of Stefan Mucke, Olivier Pla and Billy Johnson became held up with an alternator-related issue in the second hour of the race, which put it multiple laps down. The No. 66 team never recovered and subsequently finished last in GTE Pro – although the No. 67 sister car had a much more positive outcome.

No. 67 drivers Harry Tincknell, Jonathan Bomarito and Andy Priaulx looked fast all race and ran near the front of the pack for the majority of the event’s duration, even leading at one point, but didn’t have the pace to truly challenge the race-winning No. 91 Porsche 911 of Richard Lietz and Gianmaria Bruni.

Post-race, Bruni said it became clear the team had the pace to win once it was able to pull away from the No. 67 Ford.

“It was a very hard race from the start but we had a good car and the preparation we had for this race was unbelievable from the team,” he said. “We worked very hard with the tyre life on the test days. The race went our way from mid-race on. We were consistent, we were not the fastest but we did a good overtake on Ford and BMW and this was the key moment for us. Richard pulled away from the No.67 Ford at one point and we knew that the BMW had to do a splash at the end and it all worked well for us. I am very happy to get my first win for Porsche.”

Completing the podium was the No. 81 BMW M8 of Nicky Catsburg, Alexander Sims and Martin Tomcyzk, which also ran well all race to put up a solid points finish at the challenging south Florida circuit.