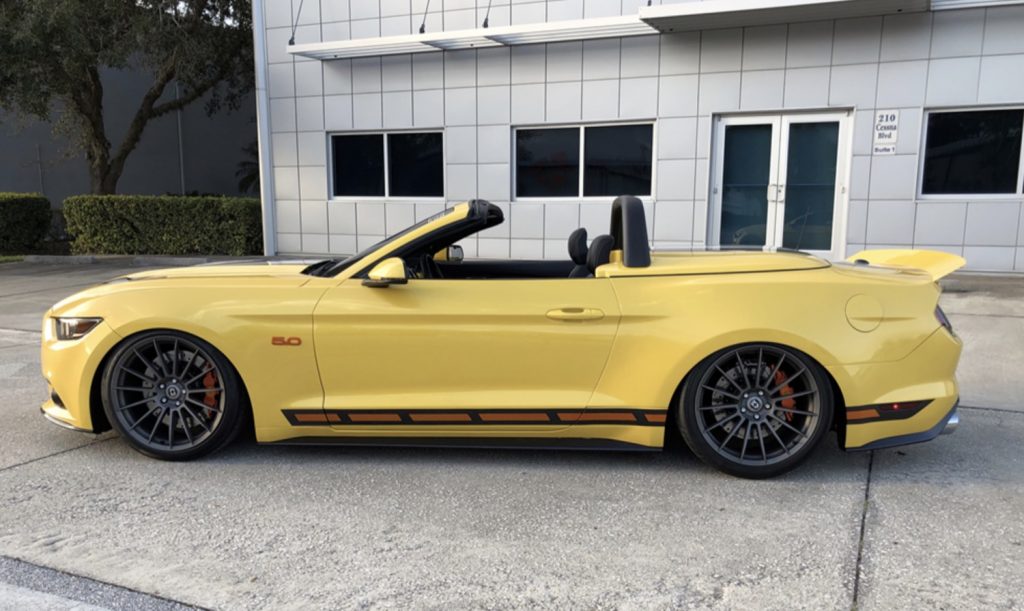 In February, we reported about a 2017 Ford Mustang Petty’s Garage King Premier Edition up for auction at Mecum. Now, we’ve come across another Petty’s Garage Mustang for auction, this time at Barrett-Jackson. This particular one-of-one Mustang GT is being auctioned with no reserve on April 11th, 2019. Arguably the best part about the auction is that 100 percent of the final auction price will be donated to the Wounded Warrior Project.

This Mustang GT is being auctioned on lot No. 3000 at Barrett-Jackson next week, and features a monster engine under the hood. The 2015 Mustang GT convertible has been upgraded with a Whipple supercharger and is boosting the power to the tune of 825 horsepower. The blown 5.0-liter V8 is paired to a 6-speed manual transmission and the odometer reads just 344 miles. In fact, this particular Mustang GT was honored as one of the top five Mustangs at the 2015 SEMA Show. Petty’s Garage took the car to the next level with a few exterior modifications. The Mustang rides on HRE wheels, stops using Wilwood brakes, and features an air-ride suspension – which is why it’s sitting so low in the above photos. The bright yellow exterior with black and orange racing stripes was a custom paint scheme made specifically for this car. This Mustang is known as a speedster because of the hardcover located behind the rear seats, which provides a unique look for an otherwise ordinary sports car.

Inside, the interior has been tastefully upgraded with alligator seats and a custom sound system. The dashboard was signed by Richard Petty himself. As mentioned, the hammer price of this Mustang GT will be donated to the Wounded Warrior Project (WWP), whose mission is to honor and empower those who incurred a physical or mental injury, illnesses, or wound, co-incident with military service on or after September 11th, 2001.