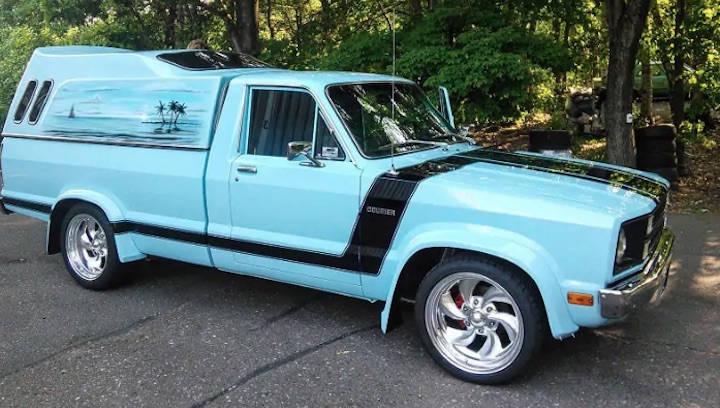 The Ford Courier isn’t a vehicle that ever got much love. Designed to be a no-nonsense, affordable work pickup, we imagine many Couriers lived hard lives before succumbing to rust or some mechanical problem.

Not this one, though. This 1978 Ford Courier was sent to the Ford Performance inbox as part of a submission for its ongoing Ford Fan Spotlight series, which highlights the raddest Ford rides that are sent in by fans.

According to the owner of this truck, he was gifted this truck from his dad when he was a teenager and he’s held onto it ever since. It’s had a ton of modifications done to it over the years, but the most dramatic is a 351 Ford Windsor V8 engine swap, which is paired with a Ford C4 three-speed automatic transmission and a Dana rear axle. If you’re wondering, this Courier originally came with a 2.3-liter four-cylinder engine and a three-speed automatic. 351 Windsor V8 in the Ford Courier

The truck also has a custom paint job (including a retro-cool rear window mural depicting the owner and his wife standing next to the truck) and a completely redone interior that includes a custom made Dakota VHX digital dash display. It’s purely a show truck now, of course, but the owner says he still enjoys driving it. In fact, despite having owned it since the early 1980s, he says he likes climbing behind the wheel now more than ever.

You can read the full back story behind this unique 1978 Ford Courier on Ford Performance’s website at this link.