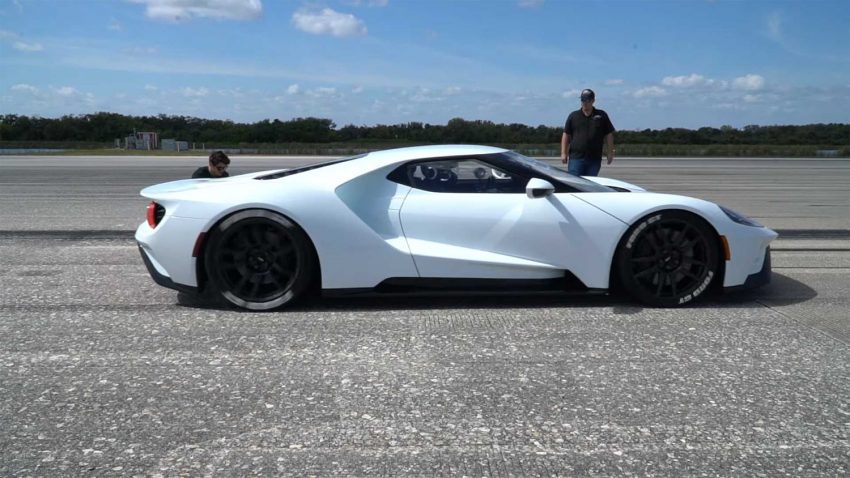 The Ford GT is a serious hypercar; Ford claims that given enough road, the car will reach 216 mph box stock. The gang over at Johnny Bohmer Proving Grounds decided to take a Ford GT and see if they could hit that claimed speed over the 3.2-mile-long runway that the space shuttle used to land on. For the top speed test, the first 2.7 miles of the longest runway of its kind in the U.S. would be used for acceleration giving the last half-mile for the car to slow down.

Conditions were good for making boost on the day the team ran the stark white and bone stock Ford GT with temperatures in the 70-degree range and humidity somewhere around 70 percent. Watch the video to see the run for yourself. Here are a few teaser factoids – the car hits 100 mph in 7 seconds on its way to 150 mph in 14 seconds. The white Ford GT is fast but the 300 mph a modified first-gen Ford GT did in the standing mile is much faster. Power for the Ford GT comes from the most powerful EcoBoost engine that Ford has ever produced making 647 horsepower and 550 pound-feet of torque. Power from that twin-turbo V6 goes to the ground via a seven-speed paddle-shifted dual-clutch automatic transmission with manual modes. The Ford GT lacks the V8 rumble many Ford fans like but the EcoBoost V6 sounds good under full throttle as it launches off the line.

The Ford GT is one mean streetcar and is a hypercar in every sense of the word. Not just anyone can buy a Ford GT, you have to be approved by Ford to buy the car and there are ironclad agreements in place to keep someone from buying one to flip for a profit. Wrestler John Cena found this out the hard way when Ford sued him for selling the car. That Ford GT continued having a difficult time and was later pulled from an auction site again.