At the 2019 New York International Auto Show, Ford had most of its latest vehicles on display. We’ve already shown your the all-new 2020 Ford Escape Hybrid. The model that lots of hybrid fans are looking forward to is the 2020 Escape Plug-in Hybrid or PHEV. We caught the all-new crossover in the flesh during the show, and this is the 2020 Ford Escape Plug-in Hybrid in SEL trim.

The front of the 2020 Ford Escape Plug-in Hybrid looks just like the other models of the crossover. The 2020 Escape has styling more in common with the discontinued in the States Ford Focus. Ford wants the 2020 Escape to be a sedan alternative, hence the car-like styling. The Escape has more Ford car styling cues than SUV styling, meaning a trapezoidal front grille and headlights pushed up to the corners of the hood with the familiar teardrop design. We also see on the front the fog lights in the faux cooling vents that are reminiscent of the Ford GT hypercar. Looking down the side of the 2020 Ford Escape Plug-in Hybrid shows the blinkers, in amber, tucked into the far corners of the headlights. The wheels are a split spoke design that is very different from the standard Escape hybrid we talked about previously. The ride height of the all-new Escape is something that Ford worked hard on with the automaker stating that the ride height will be appealing to younger, first-time buyers and empty nesters who need something easier to get in and out of than a full-size SUV. The rear quarter shot gives a good look at the integrated rear spoiler with the third brake light at the top of the liftgate, wraparound taillights, and the license plate frame in the middle of the liftgate. We see the faux air vents on the corners right above the rear bumper that remind of the Ford GT. The dual exhaust pipes come out of a metallic silver finisher. In the bottom right corner of the liftgate is a small emblem that calls this 2020 Ford Escape Plug-in Hybrid out for its plug-in nature. 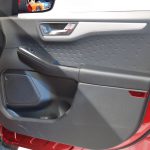 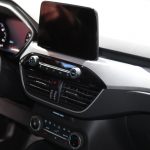 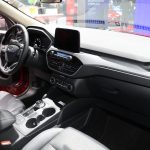 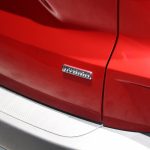 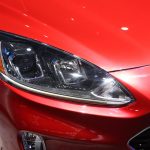 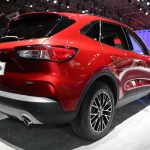 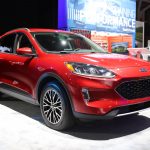 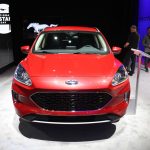