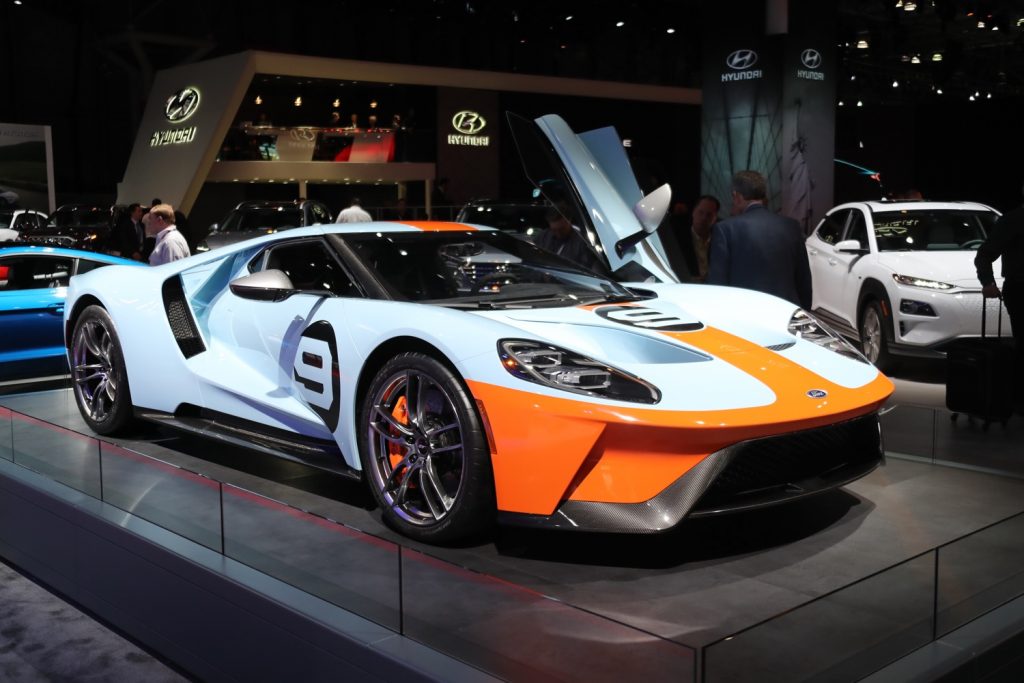 Of all the cool cars that Ford has made over the years, arguably the most iconic is the Ford GT. The modern second-gen Ford GT might lack the V8 rumble of the first-gen Ford GT of the early 2000s, but the second-gen car is one seriously-fast ride. In fact, we saw a box stock Ford GT hit 213 mph not long ago.

And as luck would have it, Ford brought with it a 2019 Ford GT Heritage Edition to the 2019 New York International Auto Show last month. The Heritage Edition wears blue and orange paint, the colors made famous by the Gulf Racing GT40s of the 1960s. The 2019 Ford GT is an aerodynamics masterpiece, and the front end shows just as much, with all kinds of scoops and intakes that are all functional. The front trapezoidal grille is placed low in the body, slurping up the air hitting the vehicle’s front end and channeling it over and around the cabin. After all, the engine isn’t in the front; the Ford GT is a rear-mid-engine car.

The headlights are placed high up on the edges of the hood rather than on the grille, allowing the air channeling ducts on the outer edges of the front bumper to move air particular fashion. And though it’s hard to see them in the images, there are a pair of large extractor vents on the hood that allows the air coming into the front grille to escape. Meanwhile, the cockpit is placed well within the body, with a windshield that’s sharply raked for aerodynamics. Note the orange racing stripe that runs the length of the Ford GT Heritage Edition. The intense aerodynamic work continue to the sides, with the Ford GT getting heavily-sculpted edges and side skirts that channel air into and around the car. The deeply sculpted “hips” are designed to grab air and thrust it into the throat of the most powerful EcoBoost engine Ford has ever made. The engine is a twin-turbocharged, intercooled EcoBoost 3.5-liter V6 making 647 horsepower and 550 pound-foot of torque.

The mirrors on the car are on quite thin and feature aerodynamic stalks. They are positioned away from the car so the driver can see around those thick hips. The split five-spoke wheels are in full effect. The doors open up and outwards to help ease ingress and egress from the car. At the back, we see the orange racing stripe unique to the Ford GT Heritage Edition coming over the top of the rear glass/engine cover. Heat extracting vents flank the rear glass to help keep the engine cool. The rear taillights look like rocket engines, and the exhaust exits up high in the middle of the rear bumper. The high placement of the exhaust means that it doesn’t interfere with the aerodynamics under the car, especially that massive diffuser fitted to the bottom of the rear end. Heck, the rear view of the Ford GT makes the car look like a jet, or a car with wings, all of which produce the necessary downforce for the Ford GT to deliver its amazing road-holding ability at high speeds. Peak through the rear glass and you’ll get a glimpse of the EcoBoost engine that powers the Ford GT, along with more vents to remove heat and channel air.

Take it all in in the gallery below, and be sure to subscribe to Ford Authority for more Ford GT news and around-the-clock Ford news coverage.