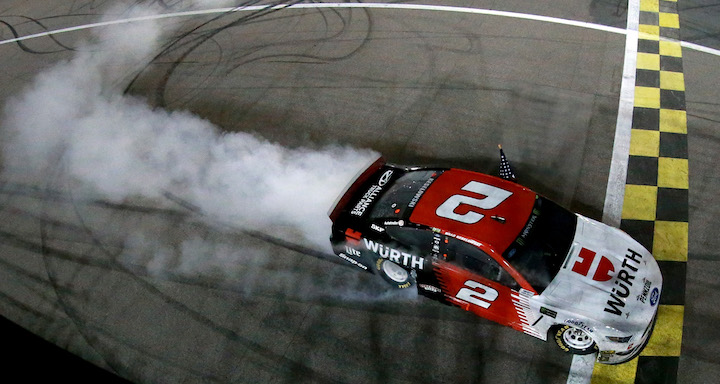 Brad Keselowski took his third win of the 2019 NASCAR Cup Series season at Kansas Speedway Saturday night, tieing Kyle Busch for the most number of wins so far this year at three and taking his second career win at Kansas. The result was also the 30th win of Keselowski’s extremely successful career.

Keselowski beat Alex Bowman in a two-lap overtime battle to win the Digital Ally 400 at Kansas. The Team Penske Ford driver stopped to put fresh rubber on his No. 2 Mustang on lap 241, setting him up perfectly for the overtime restart less than 30 laps later. When the green came back out, Bowman pulled out a gap on the field; however, he let Keselowski get close as he tried to deal with lapped traffic. The more experienced Keselowski then worked his way past Bowman and pulled out a small lead, forcing the No. 88 Chevrolet Camaro driver to take his third straight second-place finish in Cup Series competition.

“What a great day,” Keselowski said post-race. “On the (last) restart, I just got a great launch and Alex Bowman — he’s going to win a race. He did a great job today. We had a little bit of fresher tires than he did, and we were able to make the move on the outside there and caught everything perfect.”

“Just made some bad calls there through lapped traffic and got tied off, had to lift, and then the 2 (Keselowski) was able to drive around us,” Bowman reflected. “Wish we were standing here with three wins in a row, and things could have gone differently, and that could be the case, but we’ll keep digging next week and try to go get in the All-Star (Race), go win the All-Star and then go try to win the (Coca-Cola) 600.” The next race of the 2019 NASCAR Cup Series season is the non-points paying NASCAR All-Star Race, which will be held on Saturday, May 18th. Click here for full results from Kansas.