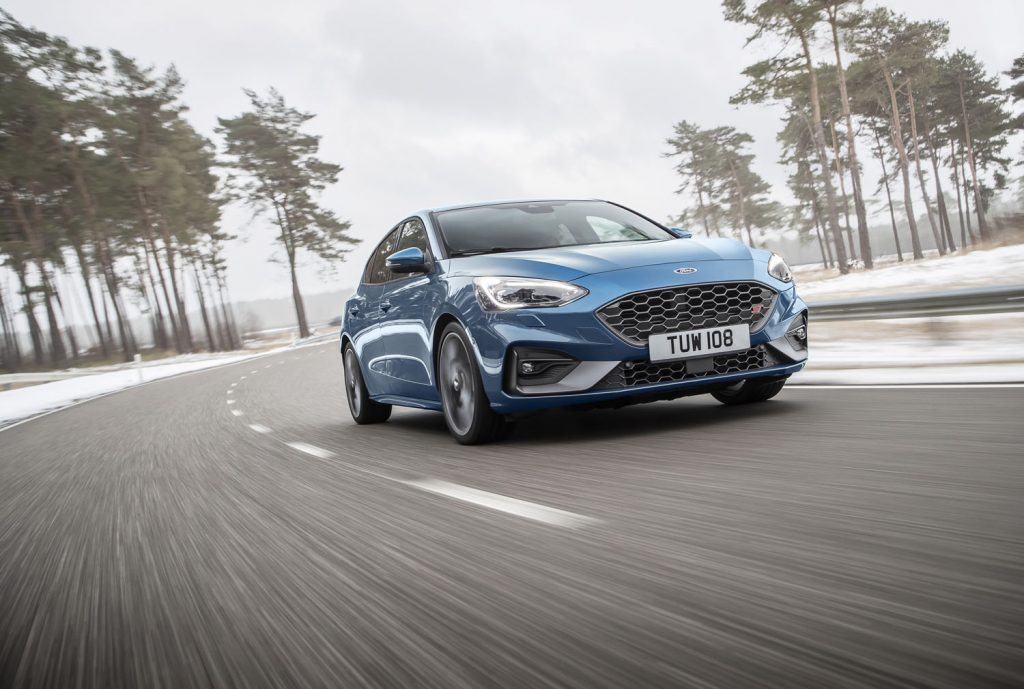 Ford Europe is talking up the performance and other features of the 2019 Ford Focus ST we can’t get here in the States. Ford Europe says that the all-new 2019 Focus ST five-door hits 62 mph in 5.7-seconds. That is faster in-gear acceleration than the previous-generation Focus RS. Ford says that the 2019 Ford Focus ST has 12 percent more power and is 12 percent faster than the previous generation that needed 0.8 seconds more time to reach 62 mph.

The improved performance comes in part thanks to the 280 PS 2.3-liter EcoBoost gas engine that offers 30 PS more than the past generation. The engine uses a new twin-scroll turbo to deliver a peak torque of 420 NM, and it has an anti-lag system to give users acceleration whenever they want it. The anti-lag technology holds the throttle open for up to three seconds after the driver backs off the accelerator to alleviate the reversal of airflow from the turbo to the main compressor. That keeps the turbo primed for immediate response and allows for faster acceleration.

Ford also rolled flat-shift capability into the 2019 Ford Focus ST that holds the throttle open as the driver shifts through the short-throw 6-speed manual gearbox to maximize turbo response. Focus ST buyers can option the car with a gear-shift indicator light that lets them know when to change gears, and the car has launch control. The 2019 Ford Focus also has an electronic limited-slip diff, a first for a Ford FWD model according to the automaker. Focus ST five-door models have Continuously Controlled Damping tech that monitors suspension, body, steering, and brake inputs every 2ms to adjust the ride. The car also has drive modes including modes for slippery, normal, sport, and track mode. Focus ST 5-door buyers who opt for the EcoBlue diesel will get to 62 mph in 7.6-seconds. Focus ST Wagon buyers get to 62 mph only 0.1 seconds slower at 5.8-seconds for the gas engine and 7.7 seconds for the diesel. All performance numbers are with the 6-speed manual; a 7-speed auto will land this fall.