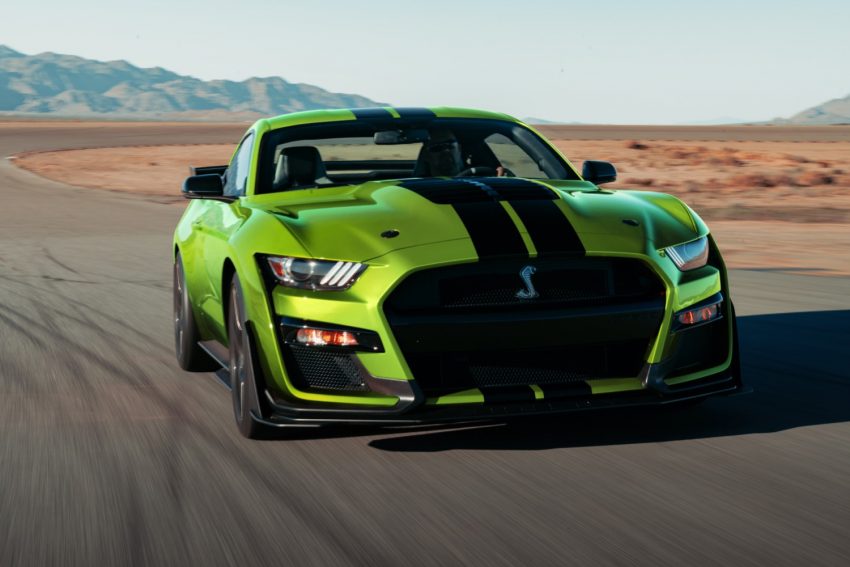 Since its debut at the 2019 North American International Auto Show in Detroit, Ford’s 2020 Mustang Shelby GT500 has been regarded as one of the most highly-anticipated sports cars in 2019. There has been a lot of speculation about the car since its official release in January, and it’s worth noting how the new range-topping snake stacks up against the competition. With Ford officially announcing power numbers recently, let’s have a look at how the 2020 Mustang Shelby GT500 compares to competitors, at least on paper. We have selected the most obvious Shelby GT500 rivals – Chevrolet’s Camaro ZL1 and Corvette ZR1, plus the Dodge Challenger Hellcat. We also picked some more indirect rivals – the Porsche 911 and BMW M4. Granted, both of the German models are luxury-level offerings, but they are very likely to intersect with the Shelby GT500 in terms of price. With that out of the way, let’s have a look. Ford has stated that the 2020 Mustang Shelby GT500 will do the 0-60 sprint in the “mid-three second range.” We still don’t know exactly what that means, but that level of performance should but the new monster snake right in line with the Hellcat and ZL1.

Ford similarly has yet to reveal the exact figure for the GT500 quarter mile performance. Currently, all we have to go on is that it will do the 1,320 in “less than 11 seconds,” which puts it in Corvette ZR1 territory. That’s all we have to go on as it relates to on-paper performance. But what all the numbers and figures don’t show is the story beyond the spec sheet. Braking, handling, and overall track characteristics should weigh into how the 2020 Shelby GT500 will manage when lined up next to any of its most direct rivals. Other considerations include add-on packages, particularly the optional carbon fiber package.

Two key elements that Ford hasn’t announced just yet are weight and price. We wouldn’t be surprised to see the 2020 GT500 tip the scales at over 4,000 pounds while having a starting price of $85,000 on to a fully-loaded version for close to the $100,000 mark, and that’s before dealers begin playing the gouging game with “market adjustment” addendums. When the 2020 Mustang Shelby GT500 launches this fall, it will be available exclusively as a Fastback Coupe with a dual-clutch transmission. In other words, there will be no Convertible model or a manual transmission option, at least as far as we know. Ford has previously stated that the Shelby GT500 will be an all-out track weapon, but that it will remain composed enough to drive on the street on a daily basis. We can only speculate about its real-world performance at the moment, but we are looking forward to getting our hands on a GT500 in the coming months to see what it can do for ourselves.