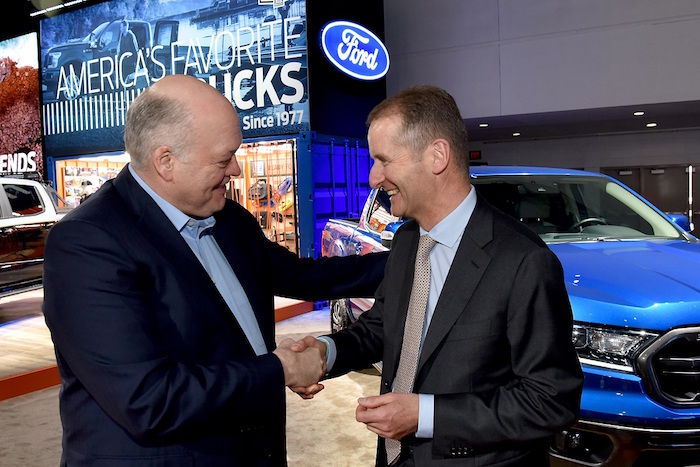 Ford and VW have been in talks for months on expanding partnerships between the two in several segments of the automotive market. The biggest thing the two have been talking about is an expanded agreement in autonomous automobiles that could see VW investing significantly into Argo AI, Ford’s autonomous auto division. A deal between the two could be only a few weeks away as Volkswagen AG’s supervisory board has added plans to discuss and possibly approve an expanded partnership between VW and Ford at its meeting in two weeks.

The report comes from Bloomberg citing sources familiar with the matter. Ford and VW have announced agreements on vans and pickups already, but a VW executive has stated that those plans are murky, the July 11meeting could also provide firmer plans on that front. VW’s supervisory board consists of 20-members and includes representatives from key shareholders and labor unions. Ford and VW have offered no comments on the meeting at this time. Ford has stated that discussions with VW have been productive on several fronts and that when the details are firmed up, it will offer more insight. VW’s CEO Herbert Diess had stated earlier this month that talks between it and Ford were progressing well and were close to being finalized. A deal between Ford and VW on autonomous autos and electric vehicles will help both automakers to share costs for developing the technologies, which is critical as those costs continue to rise. VW recently pulled out of a deal it had in place with Aurora for autonomous vehicles.

People familiar with the talks say that a Ford and VW agreement on autonomous autos could be announced as early as July. Reports have claimed that a deal between the two automakers would make Argo AI the leader in autonomous vehicles. VW is also expected to talk about building a factory in Eastern Europe with the location expected to be in Turkey, Bulgaria, Romania, or Serbia.