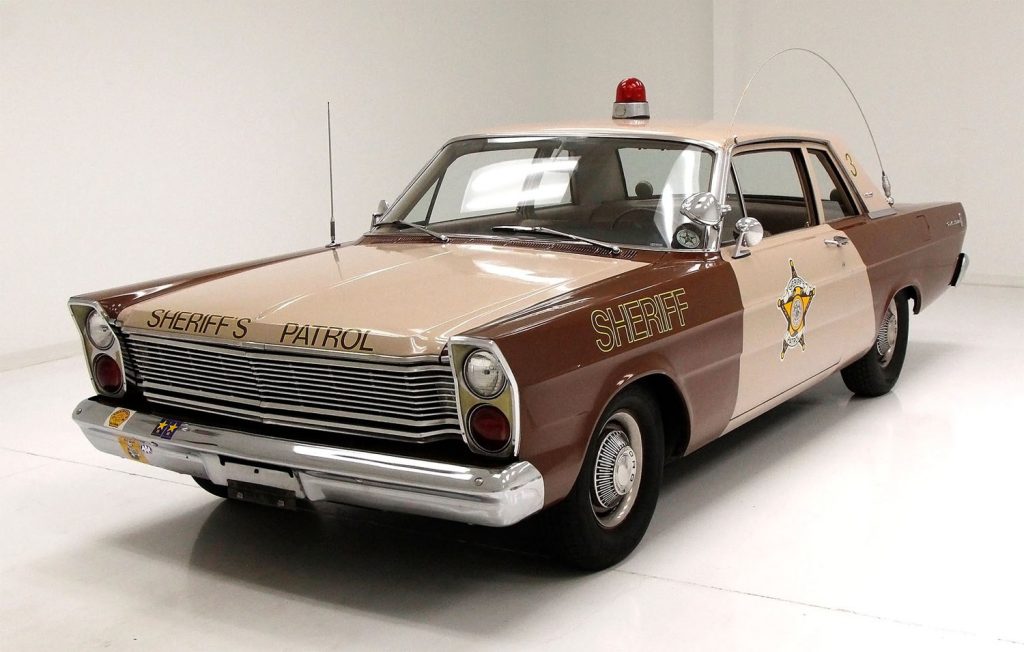 Law enforcement agencies used the 1965 Ford Custom 500 all around the country in the mid-1960s. The car seen here was outfitted for Sheriff patrol duty and was painted in a brown and tan color that is different from the black and white we normally see on police cars. The car was an actual patrol car used in a rural sheriff’s department from 1964 through 1968.

If you assumed a 1965 Ford Custom 500 police cruiser would have a big V8 under the hood to catch the speeders, you would be wrong. The car has a rather wimpy 240 cubic-inch six-cylinder engine paired up with a three-speed automatic. The car isn’t perfect, but it appears very clean. The assumption is that it was restored at some point, but we have no details on that. It has working police electronics from the era in the center console including controls for the siren and the bubble gum light on top of the roof. The car also has an A-pillar spotlight and red flashing lower lights.

This old 1965 Ford Custom 500 patrol car even has the Electro-Matic vehicle speed radar to catch the speeders. The interior is dirty, but intact, with Palamino vinyl bench seats front and rear. The car has 53,723 miles listed on the odometer. We’d wager the milage isn’t exact and the odometer has rolled. The car is located in Pennsylvania, and the asking price is $12,900. We talked about another 1965 Ford today, that one was a 1965 Ford Galaxie 500XL with a 390 cubic-inch V8.