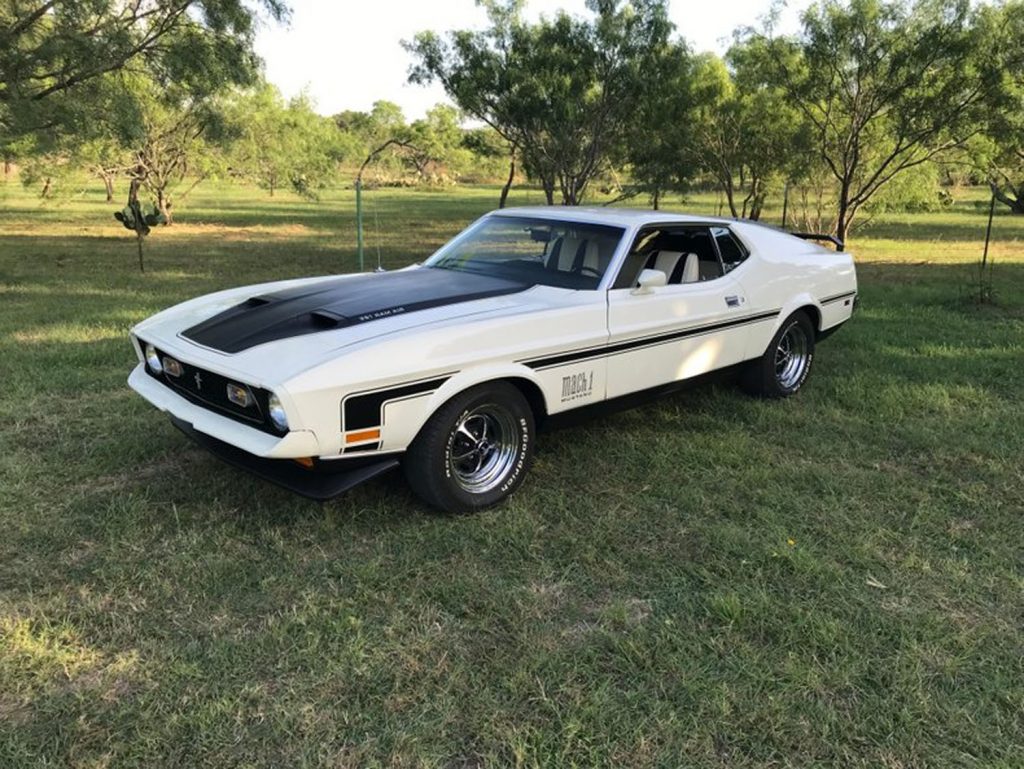 The post-1970 Mustang isn’t the most desirable of Mustang versions, but they are cool in their own right. This 1971 Ford Mustang Mach 1 is one of the more desirable of 1971 variants and is super clean. The car is a well-optioned example with factory air conditioning, power steering, and power brakes.

The 1971 Ford Mustang Mach 1 also has one of the more desirable options, a Ram Air hood. That option includes a vacuum controlled door and a fiberglass plenum under the hood to direct cold air to the air filter and into the carb. This car is an M code with a 351 cubic inch Cleveland V8 engine packing a 4-barrel carb. From the factory, the 5.8-liter Cleveland V8 was rated for 285 horsepower and 370 pound-feet of torque. Power from that big V8 goes to the road via a Ford C6 automatic transmission. The white exterior of the car is offset with black stripes and graphics. The interior is black and white, making it a very appealing color combination. The 1971 Ford Mustang Mach 1 is also fitted with the Sport Deck rear seat, a console, AM radio, Magnum 500 wheels, and tinted glass. The factory AM radio has been replaced with a modern unit, but the dash isn’t cut up.

The seller is also offering documentation with the car, including a build sheet, photographs, receipts, and a Deluxe Marti Report. The latter report shows that this car is one of only 133 1971 Mustangs that have the same paint and trim combination. The seller lists 42,144 miles on the odometer, but with the Mustang having a 5-digit odometer we aren’t sure if that is the correct mileage or not. The car is offered for sale by Sweet Dreams in Fredericksburg, Texas for $39,500. Check out this cool 1971 Mach 1 that was a Japanese export.