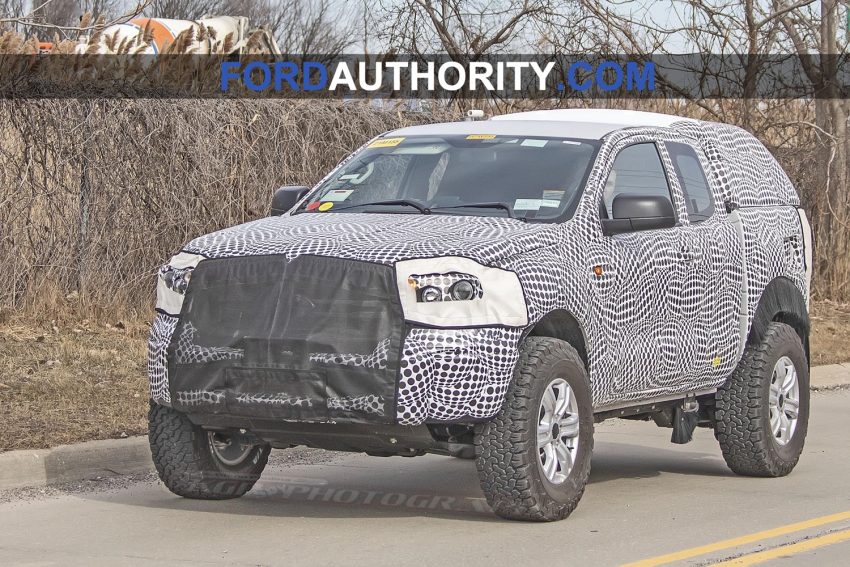 Back in June, we brought you photos of a strange Ford test mule that looked like a really short F-150 Raptor. It was the first time we had ever seen this prototype out in the wild, leading us to believe it was a tester for a hypothetical full-size Ford Bronco, therefore serving as real-world proof of Ford’s two-tier Bronco strategy. It made sense, given that the F-150-bodied mule followed on the heels of another Ford Bronco mule based around the Ford Ranger spied back in March. However, we’ve now learned that – even though The Blue Oval indeed has a two-vehicle strategy for the new Ford Bronco – it won’t be in the way we originally speculated. An early test mule of the upcoming Ford Bronco

This fresh update comes to us courtesy of sources familiar with future Ford product plans, who spoke to Ford Authority on the basis of anonymity. According to our sources, the original mule we saw in March – the funny-looking one based around the Ford Ranger – is indeed a mule for the all-new, 2021 Ford Bronco. As the tester’s proportions clearly show, the final vehicle will have small dimensions while offering a short wheelbase and short overhangs front to back, blessing it with impressive approach, departure, and breakaway angles.

A teaser of the upcoming Ford Bronco released in 2018

We’ve also received confirmation that the new Ford Bronco will source motivation from the Blue Oval’s ubiquitous turbocharged 2.3L EcoBoost four-cylinder engine. Exact output figures are still unknown, but they shouldn’t deviate much from the 270 horsepower and 310 pound-feet of torque that the powertrain produces in the Ranger. When it hits the market, the new Ford Bronco will go head-to-head with the Jeep Wrangler, and to a certain degree, the Toyota 4Runner.

What’s more, Ford will offer an even-smaller Ford Bronco model – which is something Ford has previously announced. Unofficially referred to as the “baby Bronco,” that vehicle will be called the Ford Bronco Scout, according to sources. Notably, Ford filed to trademark the Bronco Scout name back in April. A teaser of the upcoming “baby Ford Bronco”, which will be called “Bronco Scout”

Unlike the body-on-frame Ford Bronco, this new “baby” Bronco will be based on a unibody architecture, most likely derived the new Ford scalable, front-drive platform that underpins the all-new 2019 Ford Focus and 2020 Ford Escape, as well as the Lincoln Corsair. The architecture will also underpin all future Ford vehicles with a front-drive, transversely-engined powertrain configuration.

As of this writing, we have yet to see the Ford Bronco Scout undergoing testing, so spy shots of the model do not exist at the moment. Originally believed to be a mule for a hypothetical full-size Bronco, this F-150-based mule has nothing to do with the Bronco program.

Of course, all this fails to explain the strange F-150 mule we spied in June. Luckily, we’re in the process of digging up some information about that vehicle and will provide additional information on it in a follow-up post shortly. In the meantime, subscribe to Ford Authority for more Ford Bronco news and around-the-clock Ford news coverage.