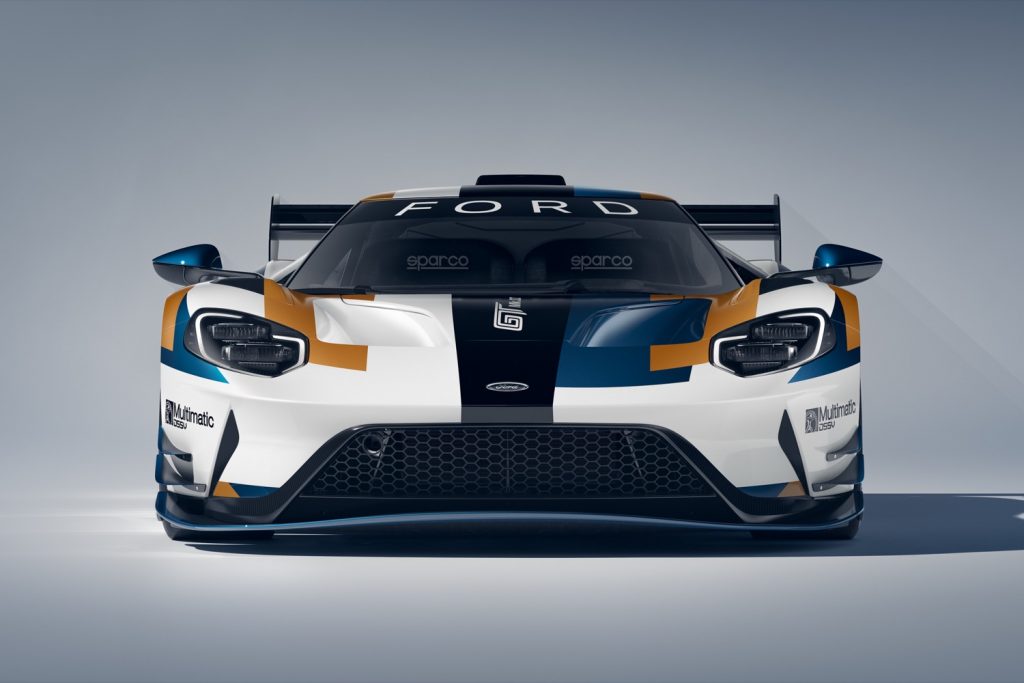 We mentioned last month that Ford was teasing an announcement for July 4th at the Goodwood Festival of Speed in the UK. Today is the day, and Ford has given up the goods on what the teaser image showed off. We figured at the time that it wasn’t a race car and thought it might be a street car, and it turns out that what Ford has unveiled is not exactly either of those. It’s called the Ford GT Mk II, and it’s a limited-edition, track-only version of the glorious Ford GT that is meant to take well-heeled drivers to the maximum performance that a Ford GT can provide. They then turned all that up a notch in creating the Ford GT Mk II, which is engineered independent of race series rules, regulations, and limitations. Among the enhancements to the Ford GT Mk II is the large dual-element rear wing that exceeds the downforce that the GT race car offers. GT Mk II also uses an all-new front racing spitter and diffuser with new fender, louvers and dive planes to balance out the extra rear downforce. Ford says that the aero changes give the GT Mk II over 400 percent more downforce than the Ford GT street car. When the extra downforce is combined with the race-proven suspension and Michelin Pilot Sport racing tires, the Ford GT Mk II can pull more than 2Gs of lateral grip. Mk II is also 200 pounds lighter and more agile thanks to the removal of the adjustable ride height and drive modes of the street car. The 5-way adjustable DSSV shock absorbers are designed to work with the fixed, lowered ride height. The roof-mounted air intake feeds more air to the engine, clutch, and transmission coolers. Since the Ford Mk II has more power, it also gets the street car’s carbon-ceramic brakes with 15.5-inch front and 14.1-inch rear Brembo rotors. The car sits on a set of special 19-inch forged aluminum wheels, and the front fascia and hood are similar to the Ford GT street car, as are the headlights. Inside the beast has a bespoke Sparco racing seat with a six-point racing harness. A passenger seat is optional. Full MoTeC data acquisition system is added, and its screen acts as a display for the rear camera. We’d say that the Ford GT Mk II is a great way to spend $1.2 million… but only if one is planning on actually using it.