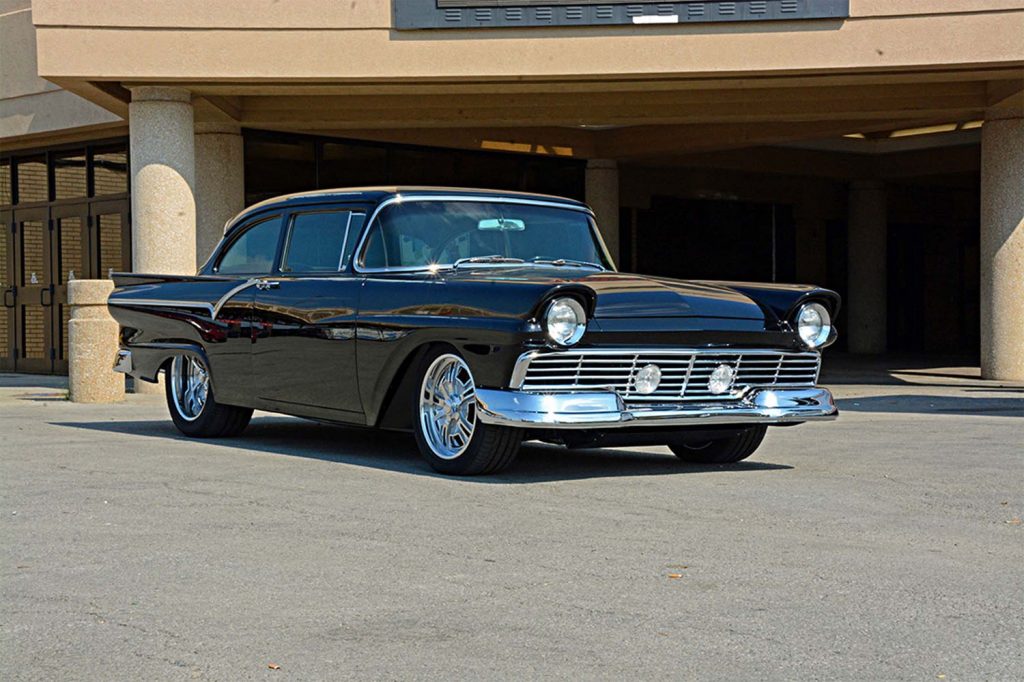 A Florida man named Jay Gribble has one of the coolest 1957 Ford Custom cars that we have seen, and not just because it looks like new on the outside. The 1957 Ford Custom is a “post car,” and after finding a suitable donor car for his project, he handed the ride off to Dream Cars of Naples.

The company went to work on a laundry list of subtle modifications that include a tucked front bumper and a custom grille that ditched the factory parking lights and added two round driving lights. The custom grill was fabricated from two stock 1957 Ford Custom grilles. The headlights have been frenched, and the hood shaved. There are lots more subtle body modifications done to the car. The wheel wells were moved forward nearly an inch and tubbed for larger wheels and tires. The tailfins were lowered slightly. The car is covered in black paint called Mile-deep by PPG. The body was mounted to an Art Morrison chassis fitted with Schott wheels.

Power for the beautiful 1957 Ford Custom came from a Shelby GT500 V8 crate motor. The supercharged engine was good for 540 horsepower right out of the box. It got a new pully, and some tune changes to make right at 600 horsepower. The underhood shots of the car show attention to detail. The transmission is a Tremec six-speed, and the car has Wilwood brakes all around. The brown interior is custom leather, and the console in the center of the bucket seats is custom. The interior is modernized, but still has that late ’50s look that matches the car. The builder also added a Vintage Air AC system to keep the inside of the car cool and comfortable. Check out the Ford F-1 truck that has a Shelby GT500 motor that we talked about recently.