The game of one-upmanship is a very real thing in the world of heavy-duty pickups, and by the looks of it, the latest Ford Super Duty 7.3L V8 is the new king of the hill. Lovingly referred to internally at Ford as “Godzilla,” the Blue Oval’s new 7.3L gasoline motor offers best-in-class power and torque, making it the engine to beat when it comes to this highly-competitive segment of workhorse trucks. We’re breaking it down to see how the new beast compares to its chief rivals from GM and Ram. Before we dive headfirst into the specs, let’s quickly examine where each of these engines are coming from, starting with Ford. The Blue Oval brand’s latest 7.3L Godzilla gas unit is new for the 2020 Super Duty line, offered as an available option above the standard 6.2L Boss V8. Speaking of the 6.2L V8, we expect the 2020 Super Duty to offer it unchanged compared to the previous model year, so although exact figures are still forthcoming, we’ll defer to the 2019 6.2L V8 specs for the purpose of this comparison.

Meanwhile, from the GM camp, we have the all-new 6.6L L8T V8, which bows in the all-new 2020 Silverado HD and Sierra HD as the latest base engine, and also the only gasoline engine in the family. The GM L8T is based on The General’s fifth-generation Small Block family and replaces the previous models’ 6.0L L96/LC8 V8.

Finally, there’s the Ram 6.4L HEMI V8, the latest iteration of which was introduced for the Ram 2500 HD and 3500 HD in 2014. The HEMI features revised tuning for improved power delivery and greater fuel efficiency. With that out of the way, let’s take a gander at what each of these four powerplants offer. To begin, each engine is naturally aspirated, which means there’s no turbocharger or supercharger on deck to stuff it with air. What’s more, all four engines sport a block made from iron and heads made from aluminum. 2020 Ford Super Duty doing what it does best

Bigger is always better when it comes to heavy-duty pickups, and the optional Ford Super Duty gasser V8 is the biggest on the block, offering a whopping 7.3 liters of displacement. Meanwhile, GM comes in second with 6.6 liters and Ram is third at 6.4 liters. The standard Ford Super Duty engine is 6.2 liters, and is therefore the smallest mill in the comparison. Finally, the transmissions. The Ford Super Duty 7.3L Godzilla pairs with Ford’s all-new 10-speed heavy-duty TorqShift automatic, giving it the win once again for anyone concerned with having the most gears. Funny enough, that 10-speed auto was actually co-developed with GM. Speaking of The General, the GM 6.6L L8T connects to the GM six-speed automatic 6L90, rather than GM’s own version of the 10-speed. The Ram 6.4L Hemi V8 mates with the TorqueFlite 8HP75 eight-speed automatic, while the Ford 6.2L hook up with the TorqShift Heavy-Duty Six-Speed automatic transmission.

All in all, the new Ford Super Duty 7.3L Godzilla V8 lives up to its namesake with some impressive specs, even when compared to some stout competition, particularly from GM. But besides all the peak horsepower and torque figures, it’s also worth noting that the immense displacement of the Godzilla V8 delivers a very flat power band, which is ideal in heavy duty pickup. So, for those looking for the biggest, baddest, most-powerful HD gasoline pickup out there, the Ford Super Duty with the monstrous Godzilla engine is the right option. 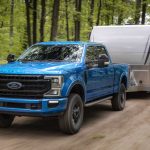 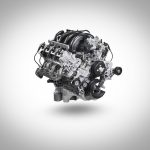