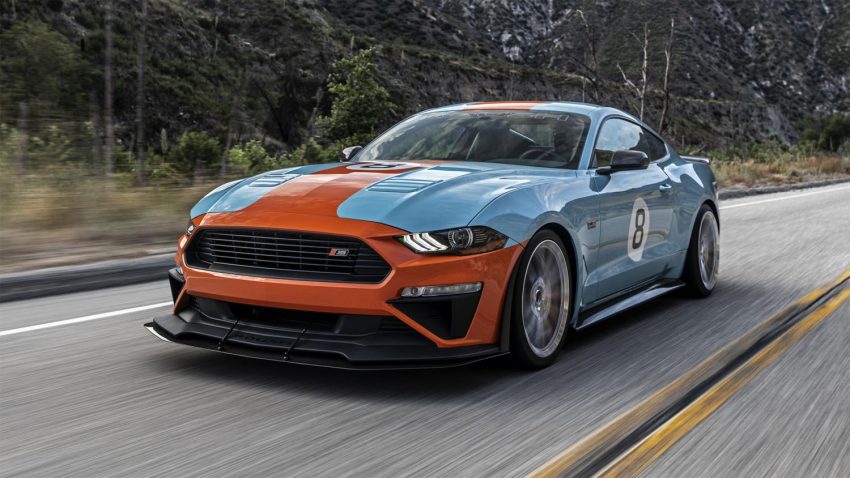 Roush announced earlier this month that it would be bringing a custom and one-of-a-kind Roush Stage 3 Mustang to Monterey Car Week. Along with the announcement all Roush offered on the car was a single teaser image that showed the iconic Gulf racing livery orange and blue colors. The promise was for more details to come at Monterey when the car was unveiled.

The weekend came and went, and now we have a bunch of photos of the car, and it looks very much like the $140,000 Gulf Livery Mustangs that you can buy at Brown Lee Ford. The paint job on the Brown Lee Ford Gulf Heritage Edition Mustang is a bit different than the Roush offering, but both rides look very good. The Roush Stage 3 Mustang was unveiled at McCall’s Motorworks Revival on August 14, and as we mentioned before, SpeedKore Performance Group painted the car. The Roush car has lots of carbon fiber tidbits with carbon front and rear spoilers. The body kit on the car is a Roush R8 Aero body kit.

The factory Ford 5.0-liter Ti-VCT V8 engine made 460 horsepower, and when strapped with a Roush TVS R2650 blower, the engine ends up with 710 horsepower and 610 pound-feet of torque. The build was intended to make a track-capable daily driver, so the Roush Stage 3 Mustang is complete with a roll cage. A big drift brake handle sticks up in the console, and the car has a Roush active exhaust system. The interior package has black leather seats that feature orange inserts and stitching with the Roush logo stitched in light blue to match the painted livery. The door plaques call the car out as a 1 of 1 Kawasaki edition in honor of the buyer, Wade Kawasaki. The car rolls on a one-off set of forged aluminum wheels from wheel Vintiques that are 20 x 8.5 front and 20 x 11 rear with 245/35R20 front tires and 283/35R20 rears. 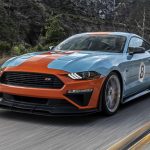 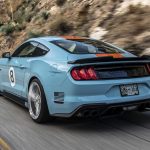 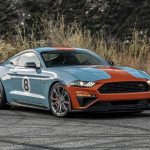 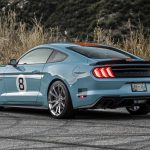 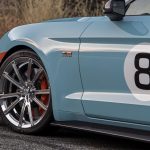 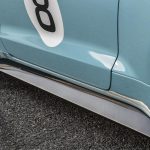 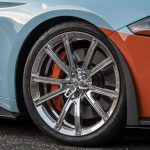 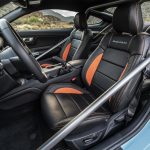 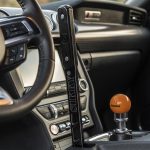 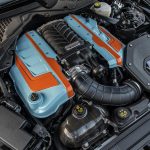 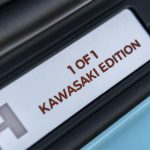