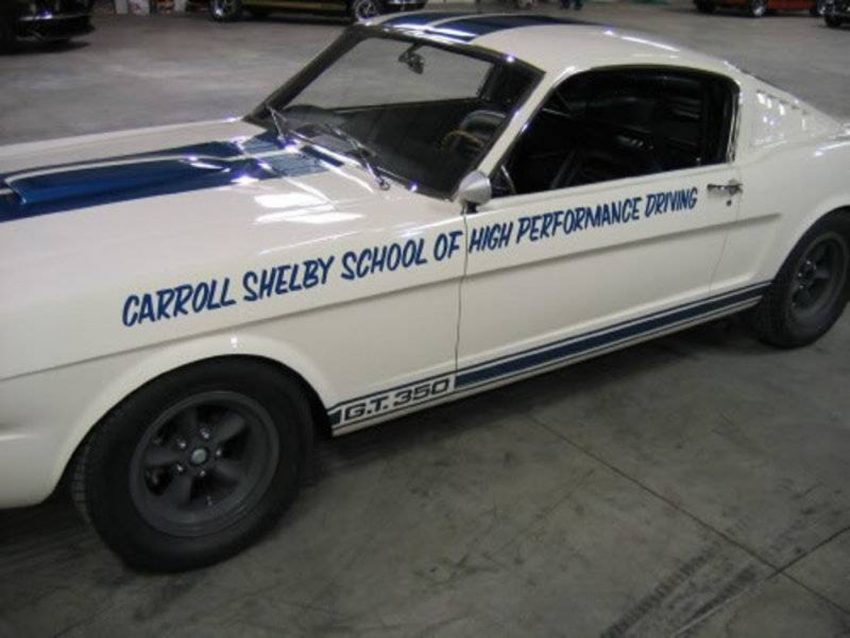 Lots of car guys and gals will recognize the Bob Bondurant School as one of the most successful high-performance driving schools out there. Before the school was the Bob Bondurant School, it was called the Carroll Shelby School of High Performance Driving. The Shelby school had a trio of tricked out 1965 Ford Mustang Shelby GT350 cars that it turned students loose in. Of the three that are known to have been used by the school, the location of two of the vehicles is known.

One of the 1965 Shelby GT350 Carroll Shelby school cars is on display in the prestigious Petersen Automotive Museum in LA. The other car is currently located in Denver, Colorado, and it is for sale. The car for sale is the second of three, and all were subjected to the same painstakingly done modifications by Shelby American for driving school and race track duty. This 1965 Shelby GT350 race car has been subjected to a concours quality restoration and is white with blue racing stripes and the scripted “Carroll Shelby School of High Performance Driving” lettering on the side of the car. The seller says that the car is fully documented in the Shelby registry and is ready for museum display. The seller says that this is one of the most valuable and historical Mustangs left in existence today.

When the words “rare” and “Mustang” are used together, that means they will sell for big money. This 1965 Shelby GT350 is offered at $1,150,000. Perhaps the rarest and most desirable Mustang left in the world is going up for auction early next year, that car is the actual 1968 Ford Mustang that Steve McQueen drove in the iconic “Bullitt” film.