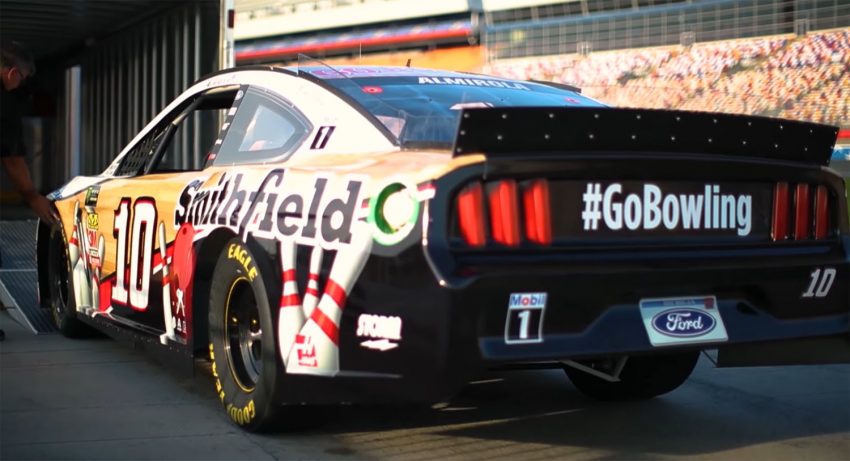 Pro bowler Jason Belmonte and NASCAR driver Aric Almirola teamed up at Charlotte Motor Speedway and took Almirola’s NASCAR Mustang around the track to hit the world’s fastest strike. The NASCAR Mustang was modified for the world record attempt with a passenger seat for Belmonte to sit in.

Almirola says that the racing car would be coming off the banking at the race track at about 100 mph and then accelerating to 140 mph. As the car heads down the front straight, a normal bowling pin setup is on the straight. Almirola aligns the car up, and then Belmonte drops the ball out the window and hopes for a strike. The deed is much harder than it sounds as Belmonte and his bowling ball is depending on Almirola putting the car in just the correct position for a strike. Belmonte says that engineer told them for every 40 yards of deviation with the car the ball can deviate by three feet.

We’d like to know how they got those bowling pins to stay standing when a NASCAR Mustang comes flying by at over 100 mph bringing all the wind with it. We’re also rather surprised the bowling balls didn’t explode. The ball that finally hit the pins had a huge chunk taken out of it.

It’s impressive how hard the ball hits those pins at 140 mph. The pins fly as does the bowling ball. One of the pins smacks one of the cameras off the fencing nearby. Check out the video above to see the 140 mph car bowling action. NASCAR fans recently had the chance to win a bunch of bacon with Almirola.