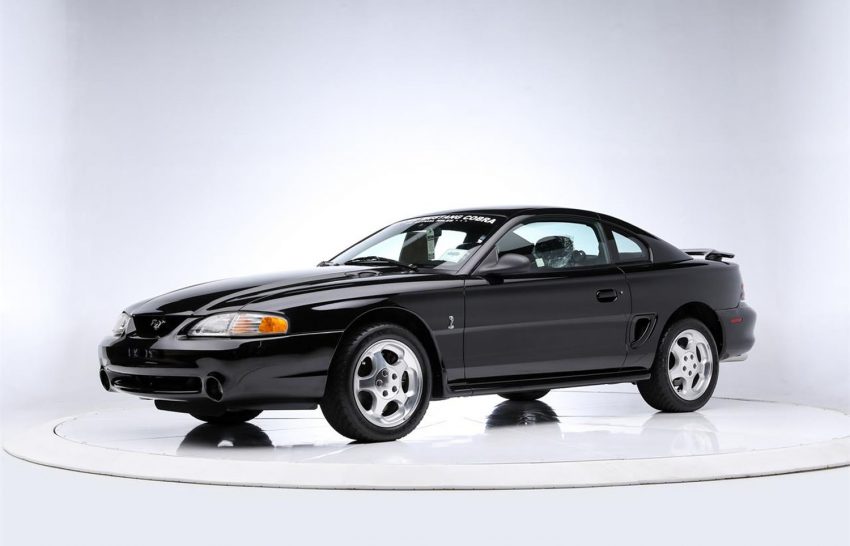 The end of the Fox-body platform in 1993 was the end of an era as far as most Mustang fans were concerned. The next generation of Mustangs grew on fans over the years, but early on in 1994 and 1995, many who had loved the Fox-body didn’t like the design direction Ford took in ’94. The 1995 Ford Mustang SVT Cobra seen here is one of those cars of the mid-’90s that was undeniably cool.

This example is a 1995 Ford Mustang SVT Cobra, and it looks like it’s brand new. Whoever purchased the car originally drove it only 105 miles before putting it in storage to try and turn a profit years down the road. The car is now for sale, and it still has the factory plastic covering its black leather seats. It makes us sad that this Cobra never got to run the roads as it was meant to, but it makes us happy to see a Cobra that is completely clean, pristine, and unmolested. Few Cobras of this vintage remain stock or in good condition. The car comes with the original window sticker, copy of the invoice, owner’s manuals, and a copy of the original purchase contract.

The seller says that only 760 1995 Cobras were ordered as this one is optioned in black clear coat on the outside and black leather interior. We doubt you will run across another 1995 Cobra with such low miles. The original window sticker, still on the passenger window, shows the car came with the Preferred Equipment Package that included cruise control, rear window defroster, AC, and floormats. The car also has a keyless remote, and Mach 460 sound. The seller is asking $49,995 for this Cobra, and we don’t see that kind of money in it right now. You can get much more desirable classic Mustangs in that price range. Are we wrong? We’d take a clean 1993 Cobra any day over the 1995.