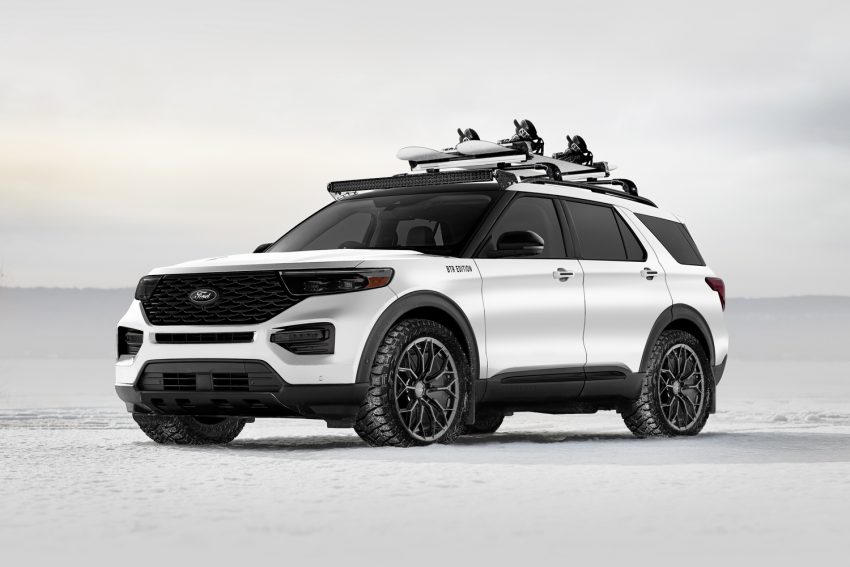 Ford has announced some very cool vehicles that are heading to SEMA 2019 this year. One of these rides is the very cool Ford Transit that rides on tank treads instead of wheels. Good Boy Daisy also has their Ford Expedition heading to the show giving us a look at what a modern rock band uses to get around. Blood Type Racing and Ford have now unveiled the Blood Type Racing Ford Explorer Limited Hybrid SUV.

The Blood Type Racing Ford Explorer Limited Hybrid SUV is the first 2020 Explorer Hybrid modified by the aftermarket, according to Ford. The ride has a half-inch suspension leveling kit and a Ford Performance skid plate.

The wheels are 20-inch Ace Alloy units with Open Country A/T II tires with off-road capability to get the Explorer off the road and into the wilds for some snowboarding. The Blood Type Racing Ford Explorer Limited Hybrid SUV has a Borla cat-back exhaust system with black chrome tips for a cleaner look and better sound from the stock 3.3-liter hybrid V6 engine.

The Explorer has several other black chrome touches, including the grille and rear bumper accents by Lacks Trim Systems. The Explorer also has black chrome door handle accents and lower door moldings. On the roof of the Explorer are a pair of BTR Edition snowboards by Blank Snowboards on a Yakima carrier mounted to a Ford Accessories Roof Rack crossbar system.

The Explorer also has a Ford accessories Ford play rear-seat entertainment system installed. As with the other Ford SEMA cars, we have only the one image and no shots of the interior, but the SUV looks very good.

Vintage Racing At Its Best: Shelby Cobra vs. Jaguar E-Type