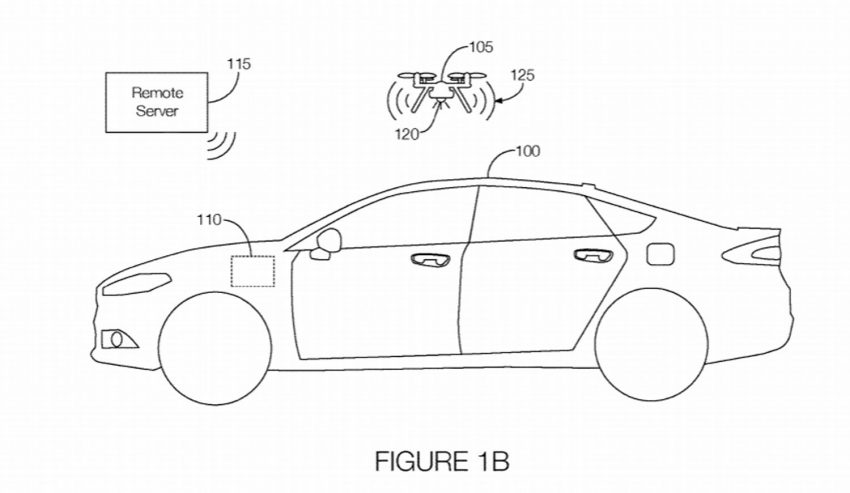 Ford has been filing for patents on all sorts of tech that appears related to the Ford Bronco recently. The last Ford patent that we talked about was for special lighting on the bottom of side mirrors that were mounted on the A-pillar. Another Ford patent has turned up on the U.S. Patent and Trademark Office website, and this patent is aimed at cars, which Ford no longer sells in the U.S. other than the Mustang. The Ford patent shows a drone that stows in the trunk of a car and deploys automatically.

The patent shows that the drone can deploy automatically out of the trunk of the car and work in conjunction with emergency providers in the event of an accident or medical emergency. The idea outlined in the Ford patent is to make it easier for police, fire, and EMS to find the vehicle. The Ford patent shows a flow chart that shows how the drone would operate. It receives an alert signal, selects an operating mode, sets a perceptible alert, and then the drone deploys. In one mode, it would hover over the car and shine a light down on the vehicle to make it easier for emergency personnel to find the vehicle. It also sounds as if the drone could use this mode to help a person find their vehicle in a busy parking lot.

The flow chart also lists a “command drone to follow vehicle” section that suggests the drone might be able to follow the vehicle as it drives. The drone does have a camera embedded that can monitor the car or other objects of interest. The drone could be of use to Bronco users who might want to have aerial video of a trail in front of them or record video to share later. It could also be of use to Mustang drivers that might want to film track time. Police might also find the drone useful for helping to find people or inspect vehicles before walking up to them. The patent doesn’t show how a drone might deploy from an SUV.