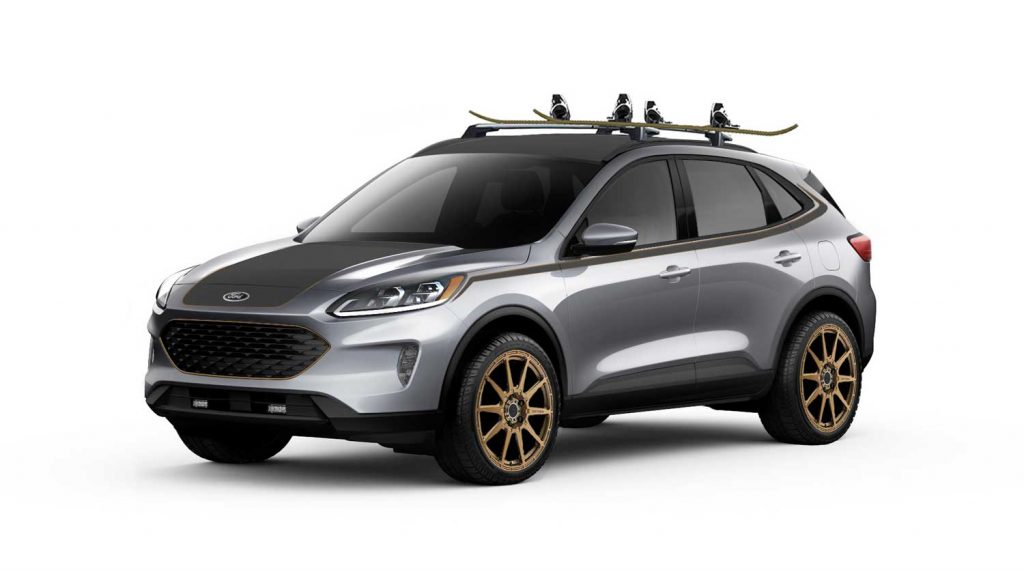 It’s nice to see that Ford has vehicles heading to SEMA 2019 other than the iconic Mustang. Ford has officially shown off multiple Ranger trucks, a couple of Expedition SUVs, and a bunch of Explorers that have been customized. Ford has ever thrown a couple customized 2020 Escape crossovers into the SEMA mix.

One of the SEMA Escapes that we talked about was the MAD Industries 2020 Ford Escape with its subtle design. Another Ford Escape heading to SEMA 2019 is the LGE-CTS Motorsports Urban Ford Escape. The designers of the Escape says that it is “equally adepts around town as it is blasting down dirt roads in Baja.” The vehicle is intended to be a surf wagon that can take the driver and passengers to secluded surf spots. The LGE-CTS Motorsports Urban Ford Escape is lowered with Eibach Performance lowering springs. It rolls on 20-inch TSW Petrol P6A wheels shod with BFGoodrich Advantage T/A Sport tires.

LGE-CTS Motorsports also fitted the Escape with a custom Borla cat-back exhaust system and Power Commander throttle control system. Those parts combine to give the 2.0-liter EcoBoost four under the Escape’s hood and aggressive sound. The Escape is also fitted with roof rack crossbars by Ford Accessories paired with Yakima mounts to haul boards and their items.

Ford says that the interior is gitted with Rogelio’s Auto Upholstery custom leather interior and accessories for life audio products by Scosche. The vehicle is a silver/gray color with gold wheels. There is no mention fo custom paint or work done under the hood for performance. With Ford no longer offering cars in the States, a lowered Escape may be something some Ford fans are interested in, and there are several at SEMA this year.