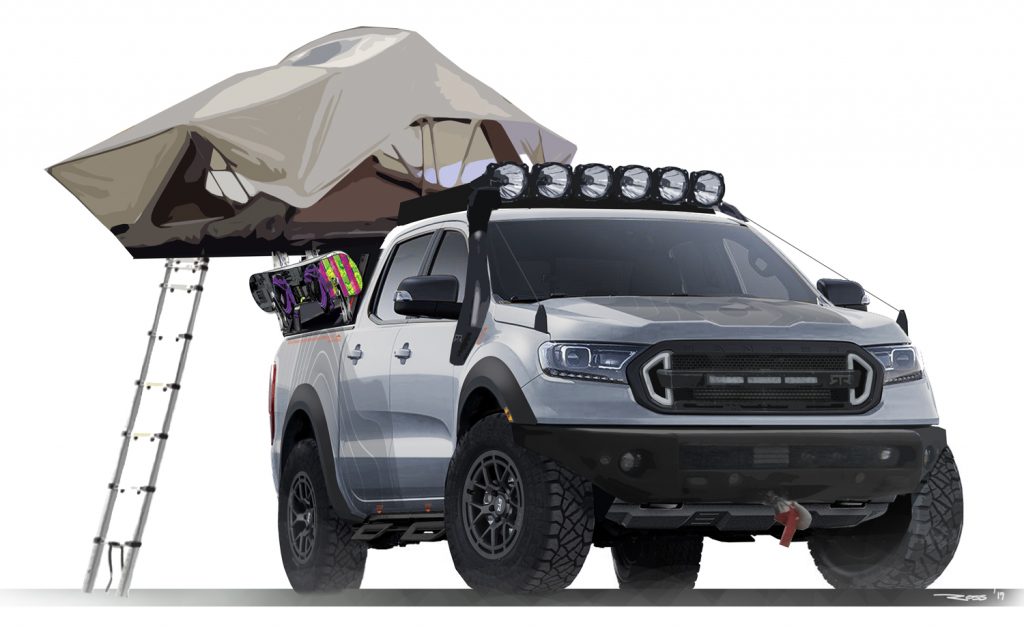 RTR is a name that most will closely associate with Ford Mustangs with hopped up performance. RTR not long ago announced a new RTR F-150, and now the company is slotting in an RTR Ford Ranger. The RTR Rambler Ford Ranger seen here is going to be on display at SEMA 2019.

The truck looks very cool and well done with a simple aesthetic that looks muscular and aggressive without being cluttered and overdone. Sometimes less on a custom truck is more. RTR says that the RTR Rambler Ford Ranger is meant to be the “ultimate overlanding and support vehicle” for owners who want to explore the outdoors.

RTR promises that the Ranger has a balance of street-abiltiy, overlanding, and trial capability. The truck rolls on the new Ford Performace off-road suspension leveling kit that several of the Ford Ranger trucks that will be at SEMA this year are using. The Ford Performance Ranger uses the same suspension system while the Hellwig truck uses a 3-inch Icon suspension lift.

The RTR Ranger has custom overlanding touches like a SkyRise tent, integrated snowboard support capsule, underbody rock protection, and custom RTR fenders. The wheels are RTR Tech 6 wheels with 33-inch Nitto Ridge Grappler tires. While it’s not mentioned in the description of the truck, it appears that the Ranger also has a custom bumper with a winch inside, lights above the windshield, a snorkel, and guide wires running from the front fenders up to the lights on top to lift branches out of the way. We particularly like the RTR grille that the truck is fitted with.