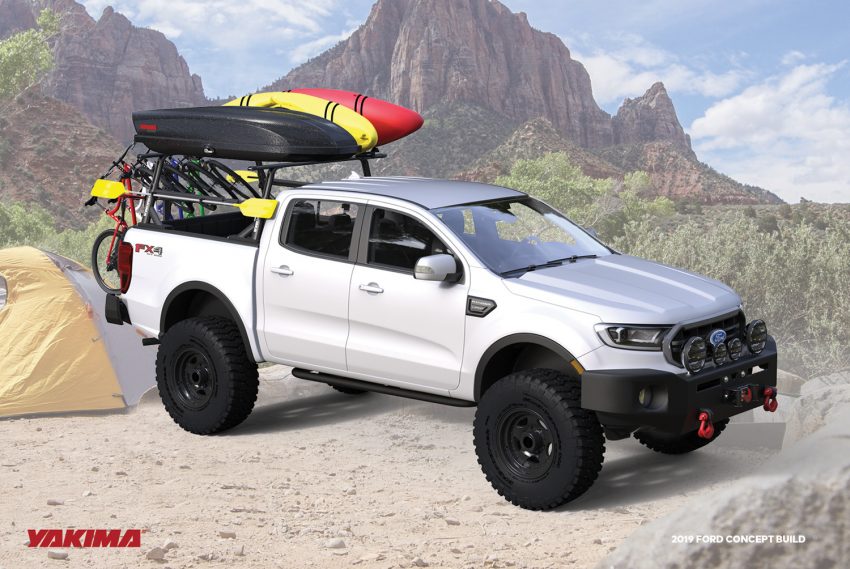 SEMA has heavily modified cars and trucks at the show every year. It’s an excellent time for car and truck fans to see what’s possible with a lot of money and some creativity. Ford is hosting a bunch of different Ranger trucks at SEMA 2019, including the Ford Performance Parts Ranger and the Hellwig Ford Ranger.

Another of the custom Ford Ranger trucks that have been unveiled for SEMA is the Yakima Ford Ranger. Yakima is a name that many will recognize as one of the largest makers of aftermarket accessories for all manner of cars and trucks. The name is particularly well known for its lien of bicycle racks that mount to a trunk or trailer hitch.

For SEMA 2019, Yakima created the Yakima Ford Ranger as an all-sports overlanding special for outdoorsy owners. The truck has suspension that is leveled out with the Ford Performance Parts off-road suspension leveling kit with a 2-inch front lift. The Yakima Ford Ranger is also fitted with a recovery kit, cat-back exhaust, and rear differential cover.

The truck has RPG bumpers, side steps, and a Warn winch tucked inside the bumper. Plenty of Rigid lighting shines light where you need it. The truck rolls on Fuel Recoil off-road wheels with 33 inch BFGoodrich T/A KO2 tires.

In the bed of the truck is a JayLow kayak mount and a HangOver vertical four bike carrier with BackSwing mount. Ford notes that Yakima is a Ford Accessories partner, and all the Yakima products on that truck are available via Ford Accessories.