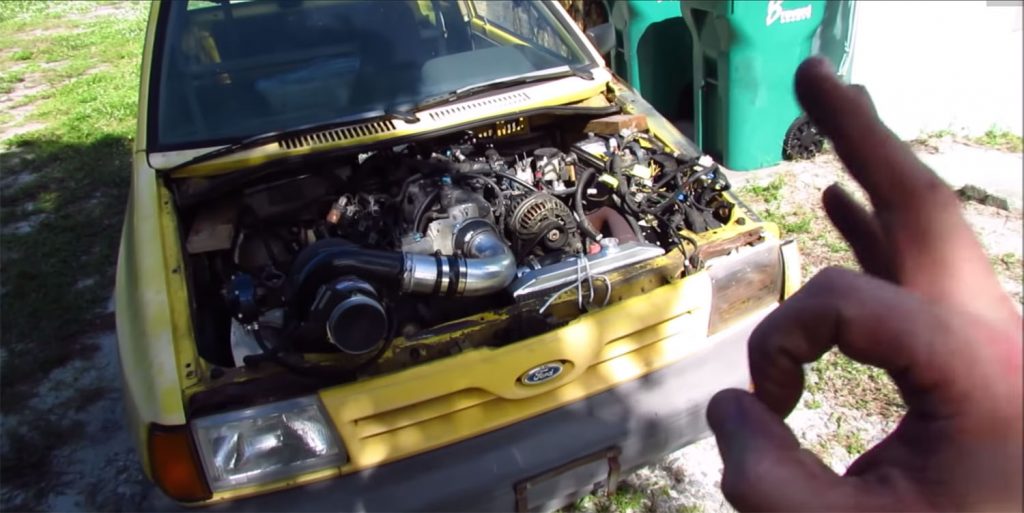 The V8 was crammed inside the little car, and the Ford Festiva was converted to rear-wheel drive. The engine that came from the factory in the base Festiva was a 1.3-liter four-cylinder engine that drove the front wheels. The only Ford parts left in this ride are those of the body.

Reports indicate that the entire drivetrain, suspension and structure of the Festiva were cut out to make room for a rolling chassis that had the turbo LS V8 installed. The donor chassis was a RWD 1990 Mazda Miata. For the Miata, LS V8 swaps are common and create a beast of a car.

The LS V8 is an LM7 Vortec 5300, and the turbo setup is aftermarket. The car is rough. The body is partially mounted on wooden blocks, and the car has no hood to fit the big V8 in. The interior is said to be almost empty. The car is apparently a burnout king. The build process was interesting, and the car looks completely unsafe, but lots of fun. The interior has a steering column that isn’t attached to anything. There are no seats and really nothing inside but a bunch of wires. You can check out the video above, but there are no “mad burnouts.” We saw a cool Ford Fiesta not long ago with Subaru power that ran the quarter-mile pretty quickly.