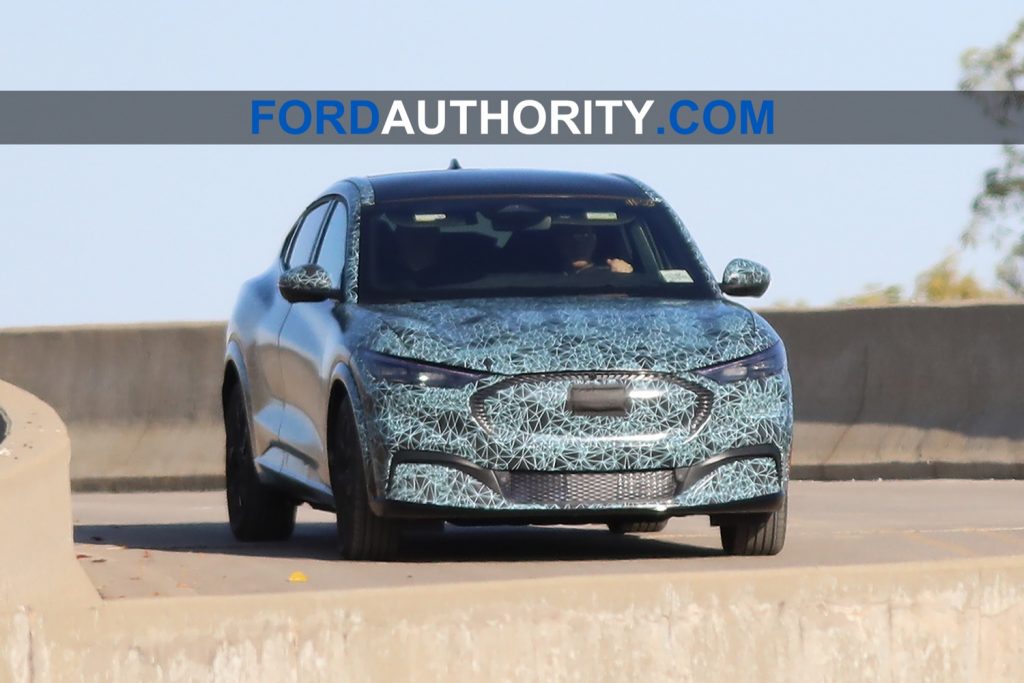 Ford will reveal its Mustang-inspired EV in less than two weeks, and our spies just caught the model in a body-hugging wrap, giving us a close look at the upcoming vehicle that we believe will be called the Ford Mustang Mach-E.

The front features a rather aggressive front fascia, with horizontally-stretched headlamps and an oval grille (which appears to be closed off). Notably, the front fenders have a rather muscular appearance around the “hood” before tucking into the character line, which runs the length of the vehicle and swoops up toward the rear – a design trait seen on the current Mustang. A small door hiding the charging port is located just ahead of the driver’s-side front door. We’ve already seen the general roofline of the Ford Mustang Mach-E in a teaser image released by Ford, but these shots provide even more detail. There are clearly four doors present, and the rapidly-sloping roofline ends in a hatch door. The rear end features a set of clear Mustang-style tri-bar taillights with a horizontal piece jutting out from the inner-most light. The EV also features broad “hips” over the rear wheels, a design trait that’s unmistakably inspired by the current-generation Mustang. No exhaust tips are present, thereby confirming that this is an electric vehicle.

Ford has yet to announce the name of this model, instead referring to it as a “Mustang-inspired EV.” Just yesterday, Ford Authority reported that it will wear running pony emblems found on the Mustang. We posted that The Blue Oval will name the vehicle “Mustang Mach-E,” thereby creating the world’s first Mustang with four doors and an electric propulsion system. Given the obvious Mustang inspiration, these photos seem to serve as further evidence that this will be the case.