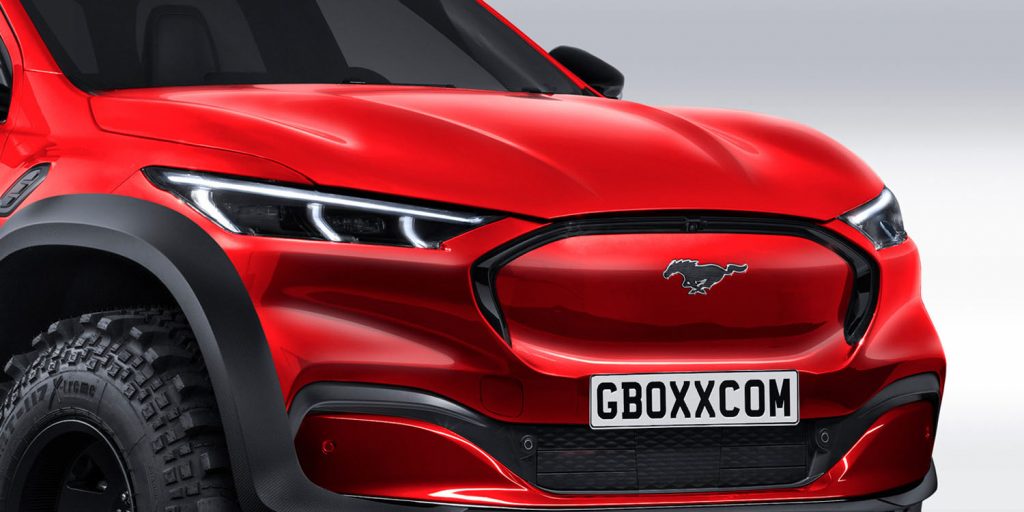 Many Mustang fans are upset with Ford overbuilding the Mach-E and putting the Mustang name on it. Those against anything other than the two-door sports car being in the Mustang line may not see the cool in the renderings here of the Mustang Mach-E pickup.

Essentially the vehicle looks a lot like the Ranger in proportions with the Mustang Mach-E front end grafted on. We think it looks pretty good, and if you are going to have the four-door SUV in the Mustang line, the truck is cooler than the SUV. We see Ranger, as mentioned in this design, but we see a bit of the Raptor as well with the bulging fenders and vent at the back of the front fender. These renderings are from a designer out of Russia called Aksyonov Nikita, and he makes very cool renderings. To our eyes, the renderings show a mid-size truck that looks better than the existing Ranger. We wouldn’t mind seeing the renderings end up as the next-gen Ranger complete with a battery-electric version. The Mach-E can be reserved now, and currently, we don’t know what sort of demand there has been. We do know that Ford production is limited to 50,000 Mach-E EVs the first year due to the availability of the battery pack. Ford has a making-of video that looks behind the scenes of the process that went into making and naming the Mach-E. It’s an interesting video with Bill Ford admitting he was against the Mach-E being called the Mustang, at first. We think the Mach-E is a cool EV, but it would have been just as cool if it didn’t wear the Mustang name, and Mustang fans wouldn’t be so upset.